NY Times: There Needs To Be A Crackdown On Illegal Alien Employers 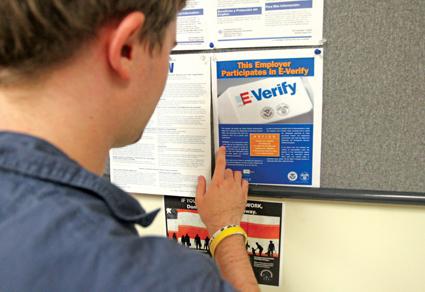 It’s hard to be sure what was going through the minds of the Editorial Board of the NY Times in calling for a crackdown of employers of those unlawfully present in the United States. Perhaps it was a typical kneejerk opposition to Donald Trump. Perhaps they’d been drinking too much. Regardless, once you get beyond the Trump Derangement Syndrome within the editorial, the idea is sound, and what I and so many others have been saying since this issue became serious in the post 9/11 world

No Crackdown on Illegal Employers[2]

President Trump began his campaign assailing immigrants as ruthless lawbreakers who steal American jobs with impunity. To halt them, he has vowed to build a wall along the border with Mexico, hire thousands of new immigration agents, ramp up immigrant detention and subject visa applicants to even more rigorous vetting. His administration has been largely silent, however, about the strongest magnet that has drawn millions of immigrants, legal and not, to the United States for generations: jobs.

American employers continue to assume relatively little risk by hiring undocumented immigrants to perform menial, backbreaking work, often for little pay. Meanwhile, as Mr. Trump’s deportation crackdown accelerates, families are being ripped apart, and communities of hard-working immigrants with deep roots in this country are gripped by fear and uncertainty. As long as employers remain off the hook, a border wall and an expanded dragnet can only make temporary dents in the flows of undocumented immigrants.

One has to wonder where this concern was during the Obama era. But, really, employers do get busted here and there. It just doesn’t make the news like an illegal alien murdering someone. That said, the penalties are not as strong as they could be. The civil and criminal penalties for knowingly employing an illegal alien should be so painful that few would dare employ them.

Along these same lines, illegals should not be allowed to attend schools, either. Certainly, our education system attracts illegals. You can bet that the NY Times Editorial Board won’t agree with that. E-verify is supposed to be used by, at a minimum, colleges.

Anyhow, the NYTEB discusses what happened post 1986 amnesty, where they was supposed to be a system in place to make sure businesses didn’t hire illegals as a way to discourage them from coming to Los Estados Unidos.

If all had gone as planned, the nation’s population of unauthorized immigrants would have remained small and manageable. Instead, it ballooned to more than 11 million over the years, even as the government vastly beefed up border security and deportations. The main reason: Employer enforcement has been spotty, giving rise to the institutionalization of a wink-and-nod approach to hiring unauthorized workers. The government has sanctioned and prosecuted relatively few employers, because proving that employers willfully hired undocumented workers is hard and because powerful industries have pushed back on initiatives to hold employers accountable.

Let’s not forget that one of those “powerful industries” is actually the Democratic Party, which has done all it can to protect illegals, and another is a goodly chunk of the Credentialed Media, including the NY Times. The editorial goes on to recommend the use of the E Verify system, and notes that Mr. Trump’s budget only ask for a paltry $15 million for it. They have a point. While increased deportations and more visible detainments make illegals think twice about coming to the U.S., and causes many to leave on their own, making it extremely difficult for them to gain employment will do even more.

Of course, there is an ulterior goal of the NYTEB

The takeaway is clear. While it has become politically expedient to malign and scapegoat immigrants, Mr. Trump and Republican lawmakers across the country recognize that finding a way to excise them systematically from payrolls would have a crippling effect on several industries. The only long-term solution to this conundrum is returning to the bipartisan consensus that enabled the 1986 bill. This would require giving millions of undocumented immigrants the ability to earn citizenship, then developing a uniform system to verify employment eligibility, and more rigorously prosecuting employers who evade it.

Barring that form of comprehensive reform, American taxpayers will continue bankrolling an expensive, heartless crackdown on immigrants for years on end. Meanwhile, employers will continue to quietly reap the benefits of immigrant labor while looking the other way.

And that’s where my agreement ends. Especially since the editorial spent paragraphs noting how amnesty happened in 1986 then everything that was supposed to be done to dissuade illegals and crack down on employers didn’t. If we are going to look at any sort of legalization path (my personal preference would be for permanent legal status: they should not be given the right to vote), then the penalties and crackdowns and security should happen first. And Congress should dramatically increase the penalties for knowingly employing an illegal alien.