In a sane world, Barack Obama would be risking impeachment by doing this[1]. 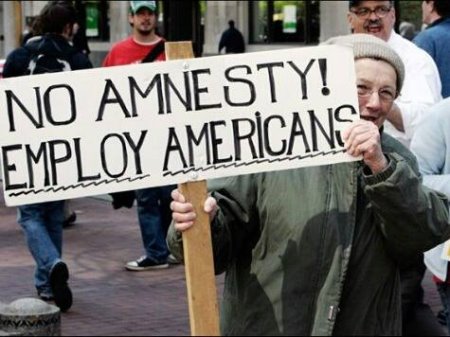 Chris Crane, president of the ICE Council, the Immigration and Customs Enforcement agents’ union, said that the President has effectively told ICE agents that they can no longer enforce the law, even as that applies to illegal aliens who have committed other crimes. He noted that while there has been investigation of the scandals of the IRS and Benghazi, “there has been no investigation into the President’s lawless activities with regard to immigration enforcement”.

“You can be in the country illegally, you can have an extensive criminal history, you can have multiple criminal convictions for serious offenses, and there is nothing that we can do to touch you,” Crane said. He pointed out that the numbers from the administration seeming to indicate “record deportations” were in fact falsely inflated. The numbers included mostly illegal aliens caught at the border, into the numbers of those deported from the interior, thereby juicing the numbers. Nothing the President says matches what he has been done, says Crane.

The ICE union has repeatedly asked for a meeting at the White House. But despite meeting with all manner of other groups on the issue, including illegal alien groups, the President has still refused to meet with the ICE union.

‘We are completely ignored,” Crane said, ‘The President will not respond to us…He gave some speeches where he called ICE agents “terrorists”. He said we went into neighborhoods and terrorized children, babies, nursing mothers, purposely tore apart families. So this President, I think, brings with him a real dislike, at the very least, for ICE agents and officers, and the mission we perform. I think there’s a real misunderstanding about what we do, and for that reason he has absolutely refused to let us be a part of any conversation.”

Barack Obama is clearly, unequivocally ordering ICE agents to break the law of the United States. This isn’t just illegal; it’s deliberately subverting the law to encourage law breaking. It’s despicable, it’s un-American and there are actually Republicans saying we should trust this man to enforce new laws in exchange for amnesty. That’s not just madness; it’s insulting.