Countless Americans have been killed by drunk drivers who shouldn’t have been here to begin with. And Sarah Root is the latest victim of an illegal immigrant drunk driver. 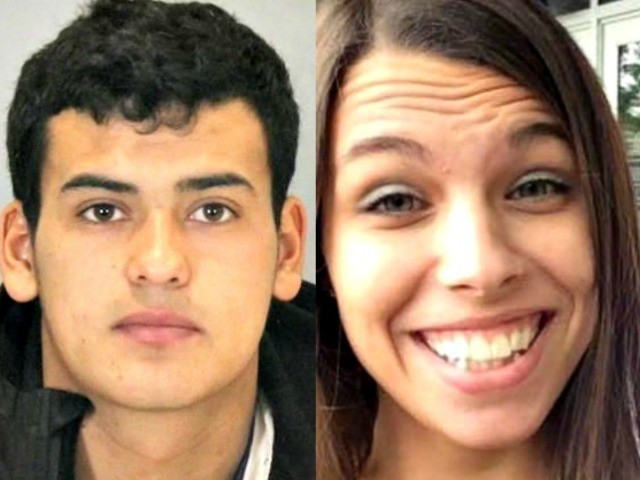 The Immigration and Customs Enforcement agency said that an illegal immigrant who killed a woman in a car crash while street racing in Nebraska was not detained by immigration officials because the offense did ‘not constitute a crime of violence’.

Edwin Mejia, 19, faces up to 20 years in prison for his role in a fatal crash that killed 21-year-old Sarah Root on January 31 in Omaha, WOWT reported.

Authorities say Mejia was drunk and street racing another vehicle when his truck slammed into the back of a stopped SUV that Root was driving.

His blood alcohol content level at the time was .241, which is four times the legal limit to drive, WOWT reported.

In addition, Mejia was driving on a suspended license and faces a motor vehicle homicide charge.

According to Omaha.com, Mejia did not show up to his required twice-daily urine tests and a warrant was issued for his arrest.

ICE has not added him to their ‘Most Wanted’ list, Fox News reported.

‘Mr Mejia should not need to be on this list – he should be in jail,’ Republican Nebraska Senator Ben Sasse said in a March 30 statement.

‘ICE originally said that Mr Mejia was not an ‘enforcement priority,’ but this morning he was placed on their Most Wanted list. The public still does not have a complete account of what went wrong.’

Sasse told Fox News that his office issued a letter to ICE Director Sarah Saldana on February 29 and said her response was ‘bureaucratic nonsense.’

He also said that he wrote to Department of Homeland Security Secretary Jeh Johnson on April and hoped to get a response that was not ‘an embarrassment to the hardworking men and women’ at DHS.

Meija was first encountered by border agents in May 2013 when he arrived in Nogales, Arizona from Honduras.

The then 16-year-old was designated as an unaccompanied child, according to the agency’s initial response letter to Sasse, Fox News reported.

He was transferred to the Office of Refugee Resettlement, a requirement by law, and then moved to Omaha in 2014 to live with his brother, Fox News reported.

It’s unclear if his brother is in the US legally or illegally.

When Mejia was arrested in January for the deadly crash, ICE officials ‘encountered him only once’ but did not detain him.

Though his actions reportedly didn’t fit the requirements by ICE to issue a mandatory detainer, DHS officials have discretionary ability to issue one if the ‘removal of such alien would serve an important federal interest,’ Fox News reported.

‘After further review, we believe that further enforcement action would have served an important federal interest in this case…,’ the ICE response letter said according to Fox News.

Root died at the Nebraska Medical Center just hours after the accident in which she suffered critical injuries.

The day before the accident, she had just graduated with from Bellevue University with straight A’s and a degree in investigations, according to Omaha.com.

Her family told WOWT that she was full of life and ready to take on the world.

How many people have to die before we start enforcing our immigration laws? And why weren’t they being enforced to begin with?