OH, THE HYPOCRISY! San Franciscans Support Illegal Immigration. Just Not In THEIR Neighborhoods…

What a bunch of freaking hypocrites.[1] San Francisco leads the nation not only in gay everything, but as a sanctuary city that is bucking for the entire state to become the first sanctuary state. Oh, if they do that, Trump will cut off all funding from the government, but I guess they haven’t thought that far ahead. Yep, they heart illegal immigrants in the City by the Bay, unless of course it’s in their elitist neighborhoods, then no way, Jose!

Neighborhood meetings are heating up on who should be allowed in certain neighborhoods. You heard me right. They are defining who exactly is the riff raff and who should be ushered in and who should be kept out. Now, that doesn’t sound very inclusive, does it? Here’s a thought… if these people are subjecting everyone there to their labeling themselves as a sanctuary city and allowing criminals etc. to roam freely, then they don’t get a say who gets to move in next door. That’s called being ‘Progressive’. It would seem when it comes to their private, prized neighborhoods, these San Franciscans are more Donald Trump than Che Guevara. 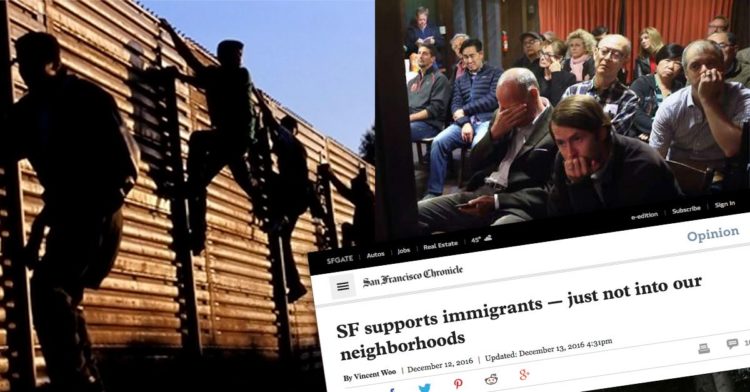 San Francisco: the city of free inclusive gay love. Just be careful when you and Johnny Go Lightly in the Loafers leans in for a kiss, you don’t catch a stray bullet from an illegal immigrant[3]. I would tell you to ask Kate Steinle about that[4], but an illegal immigrant shot her in the city of gay love. But wait, it gets worse. When it comes to immigration, the “progressive” citizens of San Francisco are showing their true colors[5]…and they ain’t the colors of the rainbow flag.

San Francisco is one of the most progressive cities in the nation, especially when it comes to national immigration. We believe so much in the natural right of people to join us here in America that we fought to keep our status as sanctuary city even in the face of being federally defunded for it.

Yet take that same conversation to the local level and all bets are off. City meetings have become heated, divisive and prone to rhetoric where we openly discuss exactly which kinds of people we want to keep out of our city.

San Francisco progressives view living in certain neighborhoods as a privilege to be earned, and see nothing wrong with preventing certain groups of people from moving in, a traditionally conservative view.

Well, well, well. Leftists want to bring in immigrants by the tanker load because they’re riding their own highs of lofty feelings. But they’re not willing to host those same illegal immigrants in their snooty neighborhoods. So when it comes to securing our borders, they’re against it. But when it comes to securing their homes, they’re Making Their Neighborhoods Great Again, erecting walls, changing locks, and lighting torches. Lemme put it another way: San Francisco elitist liberal hippies are flaming hypocrites.

Of course they are having the same issues with illegal immigrants as the rest of America. Crime has risen alarmingly… diseases are spreading and it’s just not safe anywhere in Frisco anymore. If you will come here illegally, why would you bother honoring any of our laws? It was okay when Kate Steinle was murdered by an illegal immigrant, because she was just some straight, white girl… but the gays and the wealthy in San Francisco don’t want this element anywhere near where they live. Now, they are building their own walls and borders around their neighborhoods.

Why don’t they see the entire nation this way? None of us want this and you can’t just wall yourself off and leave the majority of Americans to the tender mercies of illegal aliens. This is why we want a wall and the border secured, so we are ALL safe. Instead of screaming about racism and bigotry so much, why don’t we work towards upholding the rule of law and making this nation secure once more? Then even the ritzy neighborhoods in San Francisco will be safe. 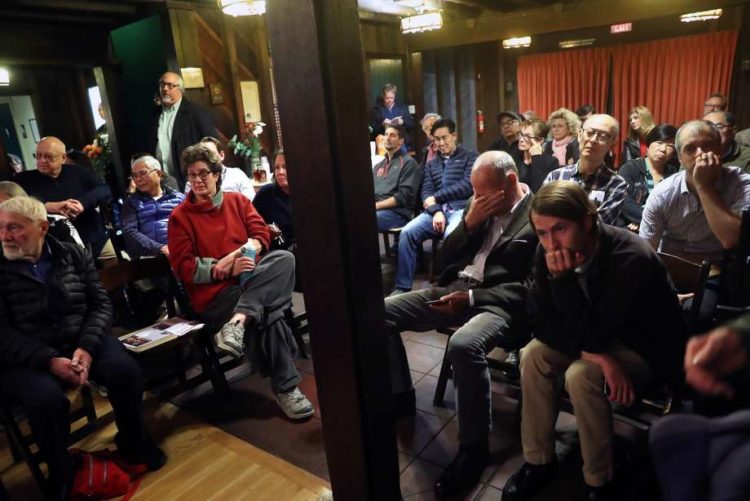 Residents attend a November meeting in Forest Hills where the neighborhood Board of Directors opposed a 150-unit project with affordable housing for seniors and the homeless.