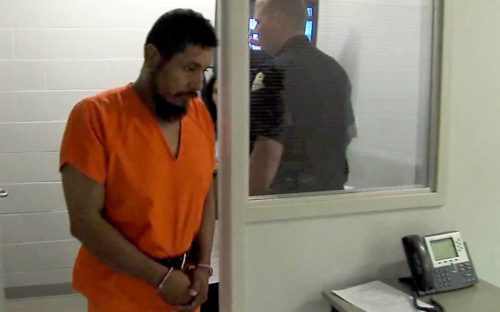 A year after killing a sheriff’s deputy in Johnson County, Kansas, a criminal illegal alien has pled guilty to that crime. Adrian Espinosa-Flores was driving with a blood alcohol level of over twice the legal limit and while driving under the influence, rammed his car into a parked SUV and a sheriff’s vehicle, killing Master Deputy Brandon Collins who was conducting a routine traffic stop. At the time Espinosa-Flores admitted he had been drinking. The criminal illegal alien pled guilty to charges of reckless second degree murder. 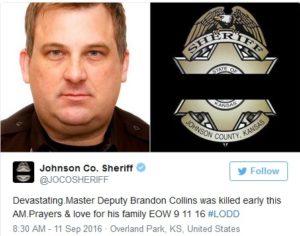 But the question is, did this really need to happen? Or could it have been prevented? And the unfortunate answer is that, yes, had certain jurisdictions followed US immigration law properly, this criminal would have been deported and unable to kill a sheriff’s deputy.

In Los Angeles County, this illegal alien was convicted of DUI. LA County did not notify ICE of this fact. Also, in 2013 in Overland Park, Kansas, the Police Department arrested him for driving without a license. And they did not notify ICE either. So, here’s a criminal illegal alien being arrested and convicted in two places, with neither reporting these facts to ICE. As a result, an officer in Kansas is dead.

US Senators Charles Grassley (R-IA) and Andy Alcock (R-KS) wrote to Jeh Johnson, the DHS Secretary at the time of this incident, to open an investigation into the fact that LA County failed to report. They said, “It appears that Flores was able to evade removal by taking advantage of at least one sanctuary jurisdiction. As a result, a law enforcement officer was killed, allegedly by Flores while again driving under the influence.”

A spokesperson for ICE, Shawn Neudauer, said, “ICE was not notified by authorities in California or Kansas of either arrest.”

Grassley and Alcock drew the conclusion that, “It seems Deputy Collins died at the hands of someone who broke our laws and should not have been allowed to remain in the United States following his multiple interactions with law enforcement.” 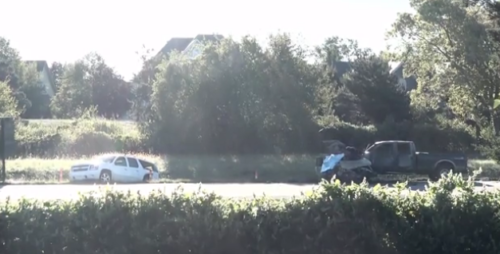 Which brings us to the recent legislation signed by Democrat California Governor Jerry Brown, that makes the entire state of California a sanctuary state, meaning law enforcement’s hands are tied and they will be unable to notify ICE of illegals who break the law. This is outrageous. The idea that illegals, who are breaking the law merely by being in the United States, are receiving protection from the state government of California, is reprehensible. California officials don’t actually care at all about protecting Americans from criminal illegals. And because of that fact, Deputy Collins is dead in a heinous crime committed by a despicable man who should not have been in the country at all.

California and anywhere else that protects lawbreaking illegals should be made to answer for their crimes against Americans. And they should lose every cent of federal funding. We are less safe because of their negligence. These places are themselves, breaking the law by not abiding by immigration laws and rules. It’s time to start holding these elected officials responsible for the crimes these sanctuary illegals commit. Rest In Peace, Officer Collins. You deserved better.