Over 1,800 Immigrants Released From Jail Last Year Have Been Re-Arrested After Authorities Refused to Deport Them

What should happen when illegal immigrants are arrested? The common-sense answer would be that they should be deported, but immigration authorities refuse to do so — and unsurprisingly, huge numbers of these illegals then go on to be arrested for criminal violations again. 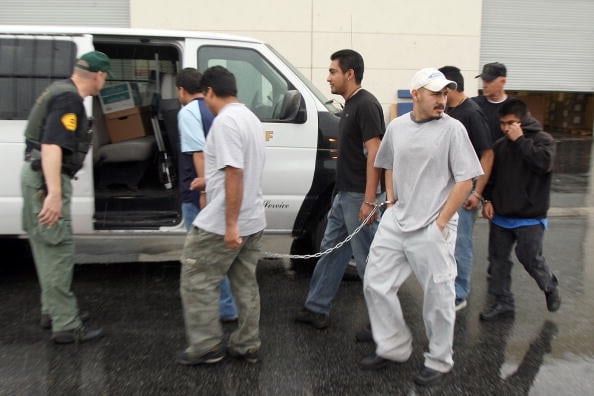 More than 1,800 arrested immigrants that were spared deportation and released from jail last year have been rearrested for various crimes, a government report reveals.

They account for a quarter of the 8,145 people freed between January and August 2014 despite requests from federal agents that they be held for deportation.

The figures, released on Monday in an Immigration and Customs Enforcement report, come amid uproar after an undocumented Mexican immigrant allegedly shot dead a 32-year-old woman walking on a pier in San Francisco – months after he dodged deportation for the sixth time.

In the report provided by the Washington-based Center for Immigration Studies, the top crimes for which immigrants were re-arrested were drug violations and drunken driving.

The report also cited six examples related to more serious offenses, including a San Mateo County case in which an individual was arrested for investigation of felony sex crimes involving a child under 14.

It was not immediately clear whether the individuals in these cases were re-arrested for crimes committed after they were released from jail or older violations. ICE did not comment on the findings in the report.

‘This is a genuine safety problem, and also a crisis for immigration enforcement,’ said Jessica Vaughan, the center’s director of policy studies.

Anyone who might have been injured or killed because of one of these drunk driving episodes could have had their lives spared if immigration authorities had done their jobs, let alone someone who became a victim of a violent crime. There is no excuse for not deporting an illegal immigrant caught period, because crossing our borders illegally is in and of itself a crime; but what reason could there possibly be to allow an illegal alien who has gone on to commit more crimes to stay? The idiocy here is mind-boggling.