Rep. Gutierrez to La Raza: Obama Assured Me That He Would ‘Stop the Deportation of Our People’

What happens when you put a Democrat whose loyalties are to illegal immigrants over American citizens in office? You end up with someone like Luis Gutierrez, who is promising to stop the deportation of illegals to La Raza. 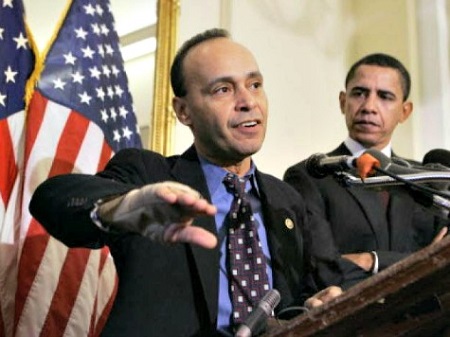 On Saturday, Rep. Luis Gutierrez (D-IL) said President Barack Obama’s Deferred Action for Childhood Arrivals (DACA) program was a “down payment” to the Hispanic community before more grants of amnesty for illegal immigrants.

Speaking at the National Council of La Raza conference in Los Angeles, Gutierrez said that Obama assured him during a White House meeting with Members of the Congressional Hispanic Caucus last week that he would be as “generous and broad” as he can to “stop the deportation of our people each and every day.”

“You gave us a down payment when you freed 600,000 DREAMers from deportation,” Gutierrez said. “Now it is time for the president in the United States… [to] free the Mom and Dads of the DREAMers. And to go further. Be broad and expansive and generous.”

Stop the deportation of our people?! Is this man supposed to be an American or not? If his loyalty is to illegal immigrants over the American people, then quite frankly, he has absolutely no business whatsoever holding any kind of political office.