Senate Majority Leader: Harry Reid, D-Nev., blocked a last-ditch effort by Republicans Thursday to restore full military pensions. Their proposal would have been paid for by denying tax credits to undocumented immigrants. 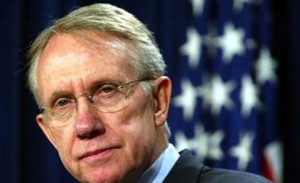 Pensions to retired and disabled veterans were cut last month in a budget compromise hammered out by Sen. Patty Murray, D-Wa., and Rep. Paul Ryan, R-Wisc., according to the: Washington Free Beacon.

Sen.: Kelly Ayotte, R-N.H., attempted to restore the pensions in the form of an amendment to a bill to extend long-term unemployment benefits. It would have been financed by requiring anyone claiming the Child Tax Credit to have a valid Social Security number, effectively denying the credits to illegal immigrants.

Ayotte’s office said the bill would save approximately $20 billion over 10 years.

According to the Treasury Inspector General for the Tax Administration (TIGTA), the refund provides incentives for aliens to enter the country illegally and cost taxpayers $4.2 billion alone in fraudulent payments in 2010.

“The investigations of this tax refund found that they were claiming it for people who were, No.1, not authorized to work in this country, and secondly, for children that may not even exist,” Ayotte said in a floor speech. “Talk about fiddling while Rome burns,” Boxer said, according to the Free Beacon. “If you are one of the 1.3 million people in this country–222,000 in my state–whose house is burning down because they’re going to lose the safety net of $300 a week to feed their families, to take care of their kids, to heat their homes, and my colleague talks about letters [SSN]?”

Ayotte’s amendment failed by a 42-54 vote, with Sen. Joe Manchin, D-W.V., the single Democrat voting with the GOP.

“It’s a sad day when a common-sense amendment to responsibly pay for legislation that helps struggling Americans, repeals unfair military retirement benefits and reduces the deficit can’t even get a vote in the Senate,” Ayotte said in a statement, the Free Beacon reported. “We need to be able to have votes on behalf of our states, on behalf of the American people, and if we disagree, let’s vote them down. I don’t see what the issue is there, unless you’re worried that it’s going to pass because it just makes too much sense.”