Sheriff EXPOSES Obama’s Orders, Putting Us In Danger – Risking Everything To Warn Us!

Sheriff Paul Babeu[1] laid it out last Tuesday and called Obama out for making life on the southern border immeasurably worse and much, much, much more dangerous. Obama is actively keeping border agents from doing their jobs. In fact, he’s reducing the presence of the Border Patrol on our border with Mexico by 20%, just when we need more agents. That’s just begging for a terrorist attack. Not to mention he is posting agents in low traffic areas, so the massive influx of illegal aliens can flow over the border unhindered. It’s a deadly recipe that will end up with American’s dead. 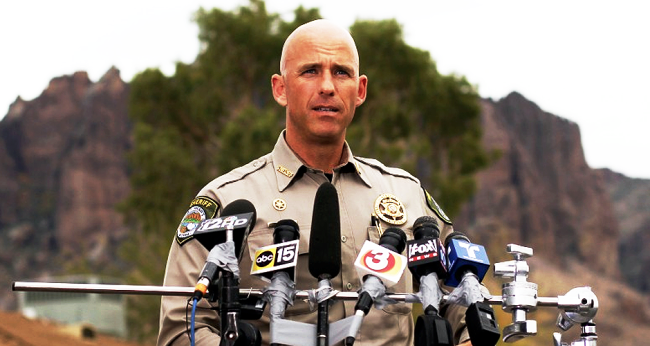 “He has manipulated the data, had agents assigned to low traffic areas and attempted to quiet dissent by calling those who question his approach as misinformed without offering any evidence to support these allegations,” Babeu said.

A tweet from the Sheriff’s Office was to the point:

National Border Patrol Labor Council President Brandon Judd joined Babeu Tuesday. “We are either going to be a specialized law enforcement agency dedicated to enforcing our nation’s immigration laws or a political arm of the administration,” Judd said. “The president is bypassing Congress by legislating through policy. These policies in essence are granting amnesty to thousands, if not millions, of persons who enter the country illegally,” he said. Illegal immigration is up 25% in just the first quarter of this year. Unaccompanied juvenile immigration is up a staggering 102%. But do you hear any of this on the news? Nope. That is why Babeu is ringing the alarm bells. Someone’s got to.