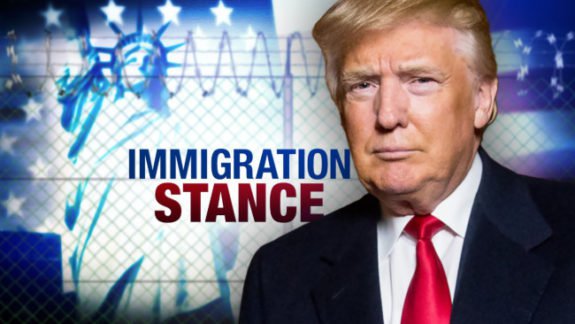 I would hope that it’s not really necessary for President Trump to rally the Republicans who control Congress to pass two bills (mentioned Friday[2]) that crack down on illegal immigration, but, one can never know what certain GOP squishes will do

(Washington Examiner[3]) President Trump on Wednesday will use the bully pulpit to rally support for tough immigration legislation, a day after he was forced to watch the Senate pull the plug on a healthcare reform bill that Trump has sought since his election.

Trump will meet at the White House with victims of crimes committed by illegal immigrants, in a bid to boost two bills that the House is expected to pass Thursday before lawmakers leave for the July 4 break. The bills are aimed at thwarting “sanctuary cities” that refuse to cooperate with federal officials on immigration and imposing tougher penalties against deported criminals who re-enter the United States.

Trump has spoken out often as a candidate and as president about the need for tougher policies against illegal immigrant criminals. (snip)

Trump’s job for the rest of the week will be much easier, as the two immigration bills he’ll support will get votes in the House and will pass easily thanks to the GOP’s majority there. They’re also related to a bill that passed in the House in the last Congress under former President Barack Obama, who was never going to sign them into law.

It better be easier, if the GOP knows what’s good for them electorally from those who vote Republican

The first bill up on Thursday will be the No Sanctuary for Criminals Act, a bill aimed at discouraging the formation of sanctuary cities that refuse to cooperate with the federal government on immigration.

Goodlatte’s bill would withhold some federal grants to jurisdictions that prohibit their officers from communicating with Immigration and Customs Enforcement and require illegal immigrants convicted of dangerous crimes to be detained during removal proceedings.

The legislation would also permit lawsuits by victims of crime against jurisdictions that practice sanctuary city policies.

The second bill is Kate’s Law, which would impose tougher penalties against deported felons who return to the United States. The bill is named after Kate Steinle, who was killed by an illegal immigrant who had been deported five times.

You can bet the ranch on Democrats having apoplectic fits over the first bill, especially since it allows the aforementioned lawsuits against sanctuary jurisdictions. Imagine that, allowing people to sue government for government’s unlawful and bad behavior. And it will be interesting to see how Democrats will caterwaul about these laws treating criminal illegal aliens harshly.

Most likely, these bills will pass on party line votes, and be on Mr. Trump’s desk by early next week. Democrats will have their work cut out on coming up with talking points to defend voting against protecting American citizens from criminal illegal aliens.