The most important part of a newspaper article is the headline, not only because it tells you how to interpret the following story, but because the headline is often the only part of the article people read. That’s why an adjustment was urgently required when someone botched the headline of a Washington Compost article intended to make us weep for the plight of foreigners who invade our country in contravention of our laws and then sponge off the welfare state.

Before and after revision: 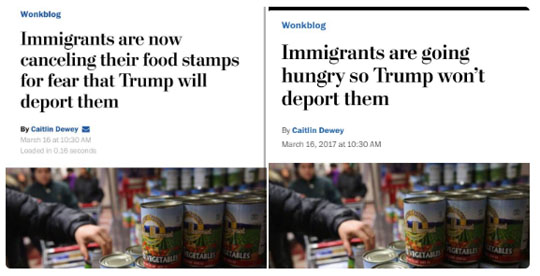 That’s better. The new version ought to be far more effective at tugging on the heartstrings.

At first, it probably did not occur to anyone at WaPo that people would object to illegal aliens collecting food stamps — which is the real story here.

On tips from Bodhisattva and Troy. Hat tip: Twitchy.