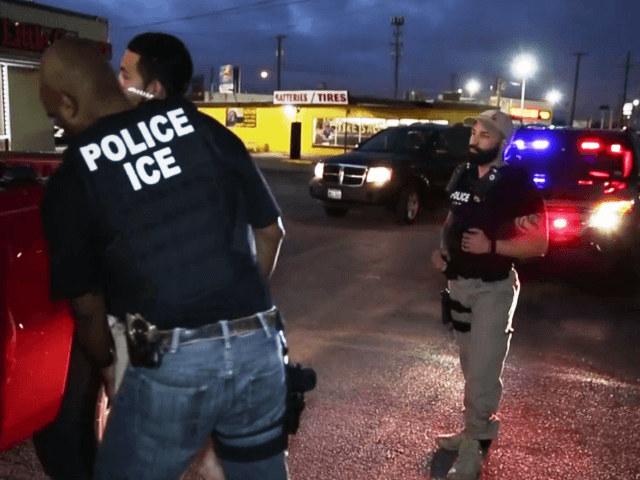 Trump is deporting fewer immigrants than Obama, including criminals[2]

President Trump has vowed to swiftly deport “bad hombres” from the United States, but the latest deportation statistics show that slightly fewer criminals were expelled in June than when he took office.

In January, federal immigration officials deported 9,913 criminals. After a slight uptick under Trump, expulsions sank to 9,600 criminals in June.

Mostly deportations have remained lower than in past years under the Obama administration. From January to June, Immigration and Customs Enforcement deported 61,370 criminals, down from 70,603 during the same period last year.

Well, it helps when sanctuary jurisdictions are not working overtime to make sure ICE doesn’t pick the illegal up.

During the election, Trump vowed to target criminals for deportation and warned that they were “going out fast.” Later, he suggested he would try to find a solution for the “terrific people” who never committed any crimes, and would first deport 2 million to 3 million criminals.

But analysts say he is unlikely to hit those targets. Since January, immigration officials have deported more than 105,000 immigrants, 42 percent of whom had never committed any crime.

Except for coming across the U.S. border/overstaying visas, which is against federal law.

John Sandweg, the former acting director of Immigration and Customs Enforcement, said part of the reason for the decline is that illegal border crossings have plunged since Trump took office pledging to build a “big, beautiful” wall and crack down on illegal immigration. Immigrants caught at the border accounted for a significant share of deportations under the Obama administration.

Trump’s policy of making potential illegals, and current illegals, fearful has worked well to keep the potentials from attempting to cross the border illegally.

Another factor, however, is that immigration officials are arresting more people who never committed any crime — some 4,100 immigrants in June, more than double the number in January — clogging the already backlogged immigration courts and making it harder to focus on criminals.

Except for being present in the U.S. in contradiction to federal law. Why is it so difficult to understand that?

A big difference in the numbers is that Obama was counting those caught at the border and immediately sent packing as a deportation. In fact, interior deportations, including of those “bad hombres”, was down during the Obama administration. People throw around numbers ranging from down 25% to 40% to 70%. In 2014, the LA Times wrote[3]

But the portrait of a steadily increasing number of deportations rests on statistics that conceal almost as much as they disclose. A closer examination shows that immigrants living illegally in most of the continental U.S. are less likely to be deported today than before Obama came to office, according to immigration data.

Expulsions of people who are settled and working in the United States have fallen steadily since his first year in office, and are down more than 40% since 2009.

On the other side of the ledger, the number of people deported at or near the border has gone up — primarily as a result of changing who gets counted in the U.S. Immigration and Customs Enforcement agency’s deportation statistics.

All in all, ICE and the Trump administration are doing pretty well. Counting deportations the same way as Obama makes it seem as if there are fewer, but, it comes from there being fewer illegals being caught and immediately deported because there are fewer illegals attempting to come across the border. But, many, many more are being scooped up in the interior.