Amnesty goes to the Senate floor…

And we’ve still got time to kill it. 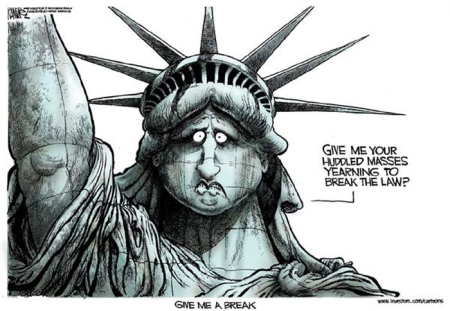 The bill has big problems, not just with me but with enough members of the US Senate to block a vote.:  The latest problem to rear its head — actually we’ve known about it for a long time, it’s just starting to get press — is border security.

As we’ve noted in our series (see below for links), the bill is supposed to be a security first, amnesty second piece of legislation.:  It’s not and Marco Rubio is lying about the security provisions.:  This: Washington Examiner[2]: article points out what we’ve been saying…

When the bill first came out, Rubio did a comprehensive tour of conservative radio shows selling a border commission made up of federal and state officials as the linchpin security measure of his plan. For example, here is what he told: Mark Levin[3]:

It requires if the Department of Homeland Security does not achieve 100 percent operational awareness and 90 percent apprehensions on the border, they lose control of the issue, to a commission, not a Washington commission, to a local commission, made up of the governors of the four border states, talking about Texas and Arizona, where they will then finish the job of securing the border, including the fencing plan.

But the border commission would do no such thing. Far from taking “control of the issue” and “finishing the job,” under Rubio’s bill, all the commission does is issue a report and give it to the Department of Homeland Security. That’s it. DHS can then throw it directly in the trash.

In other words, he’s — at best — leaving the job of securing the southern border to the Governors of the border states and at worst — which is what will happen — the Department of Homeland “Security” will declare the border “safe” and amnesty will proceed with the current wide open border in place and there will be no effort to secure it.

We’ve got some time and some hope of stopping this monstrosity from passing the Senate.:  It turns out, again reported by the: Washington Examiner[4], that there probably aren’t 60 votes — yet — to break a filibuster and allow a Senate vote.

Democratic and Republican sources working to build support for the bill agreed that garnering the necessary GOP votes would require amending the legislation to strengthen its border security components. Additionally, there are senators on both sides of the aisle who don’t support the current measure because of provisions other than border security who also must be appeased.

The bill’s supporters are now focusing their efforts on wooing as many as five Democrats who might oppose it and about two dozen Republicans described as “gettable” or “maybes” but who for now are far from a “yes” vote. …

What can we do?:  We can call and fax those three Senators, and I’d add in Orrin Hatch who is a perennial squish, and Mitch McConnell the Minority Leader.:  Let Mitch know he needs to actually provide leadership.:  There are several other Senators who are also potential votes for Amnesty and I’ve included them on the list as well as Mario Rubio who needs to know we’re on to his lying ways.

Remember, be polite!:  The points to make are:

If you’re not up to date on this critical issue, you can get current by reading our series…

Here are some additional talking points and you can follow the links for more details.

What can you do?

Well for starters use the “Share” button at top of this article to forward a link of this series to everybody you know and follow up with them encouraging them to take action.

Call you US Senators and tell them to vote NO!:  Your talking points are all laid out above.

Call your Congressman and let him or her know that you want this immigration fiasco stopped.:  Again, talking points are supplied.

Ask your friends and family to make a call as well.:  We’ve made it easy for you, click below and you can get your representative’s numbers and you can send them a fax letting them know that you want: Security First!

[19] Our Nation: is hanging in the balance and we’re running out of time.

This post was used with the permission of Joe for America[20].