BREAKING: 8 Muslim ‘Refugees’ Arrested for Being ISIS Members – This Is Chilling

Eight Muslim refugees that are part of ISIS[1] were just apprehended in Turkey at Ataturk Airport. They were sneaking into Europe posing as refugees and they had it all planned out. I’m glad they caught them, but I’m wondering how many have already made it through. This proves the point we have been making about the refugees coming into the US now… they can’t be vetted and there are bound to be terrorists among them. Identical Syrian passports have been found on several of these terrorists. Only the picture changes. The eight men told police that they were just tourists who had been planning to spend a few days in Istanbul and had booked rooms at a hotel, but no reservations were found under their names. Turkey is the primary entry point for refugees into Europe. They have over 2 million Syrian refugees there. This is the Hijrah migration in all its bloody glory.

Eight men were detained at Ataturk Airport in Turkey, and they are believed to be members of ISIS, the terror group responsible for the atrocities in France[3] on November 13th.

The police found a hand-written note on one of the suspects detailing a migration route from Istanbul to Germany via Greece, Serbia and Hungary, including smuggler boats across the Mediterranean Sea, as well as several train and bus journeys.

Following the Paris attacks, a Syrian passport[5] was found on one of the bodies of the terrorists that blew themselves up. The Greek government confirmed that the jihadist came through the Greek island of Lagos. In addition, he was believed to have gone through Serbia. 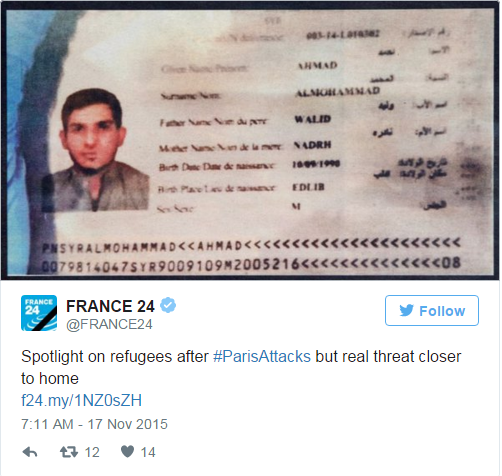 As it turns out, Serbia has seen a nearly indistinguishable copy of this passport before – and it hasn’t happened just one time.

According to the Daily Mail[7]:

In a shocking indictment of the EU’s porous borders, yesterday Serbian police revealed they had arrested a man carrying a Syrian passport which was almost a carbon copy of the one found on the IS bomber’s corpse on Friday.

It had the same name, date of birth and place of birth. The only difference was the photograph. Serbian officials said as many as six other men this year had entered the EU with virtually identical passports.

It’s not clear at this time what type of passports the men detained in Turkey were carrying, but if it’s the same as the bomber and other fake-refugees, we can just be grateful that they were caught in time.

Turkey has come under fire by the West for failing to take pretty much any action at all to stop ISIS militants from crossing their porous border into Europe. Why should they? It strengthens the Caliphate and takes back lands Islam considers are theirs. Turkey also uses ISIS to do their dirty work. They have finally stepped up some security measures recently after twin suicide bombings in Ankara killed more than 102 Turkish citizens. According to official data released to AFP last week, in the first half of 2015 over 700 foreign suspected extremists were detained and deported from Turkey whereas for all of 2014 the figure was 520. Those numbers are terrifying. It’s the ones they don’t catch that I worry about. ISIS is on the move and we have almost no way to stop them or tell who they are.