So, let me get this straight…[1] we can’t seem to stop anyone at our sieve of a southern border, but we can manage to detain two commie moonbats? I’m sure glad we have our priorities straight. Don’t get me wrong… as far as I’m concerned Medea Benjamin and her ‘lighter shade than red’ comrades can rot in hell for all I care. It wasn’t just her though. Pelosi and a whole cadre of Leftist politicians couldn’t wait to spoon with the Castro dictators and family. We won’t help Israel, but we have more than enough time, money and selfie politicians who will grovel at the communists’ feet. Disgraceful. 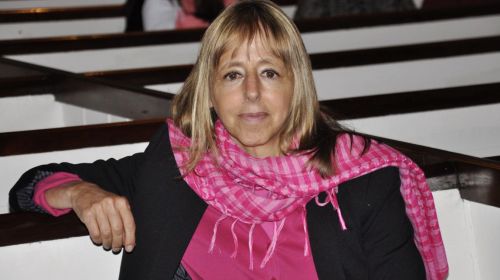 A similar message was posted to Benjamin’s Twitter account but contained a mocking comparison of the United States with “supposed repressive Cuba.”

As of this writing, Benjamin was incommunicado and Code Pink had not posted an update since making the announcement around 2:50 p.m. EST.

When Benjamin was detained in Cairo last year before being deported she posted to Twitter[2] about her plight and Code Pink mobilized to get her released.

While in Cuba, Code Pink met with the daughter[3] of Cuban ‘President’ Raul Castro, Mariela Castro, and at least one member of the Cuban Five[4].

Code Pink also participated in an outdoor rally for the communist front movement One Billion Rising[5].

There were no members of the anti-communist Ladies in White or the splinter group Citizens for Democracy[7] seen dancing on stage with Code Pink.

During Code Pink’s week-long visit to Cuba, the Castro government arrested nearly one hundred dissidents[8] without a peep from Code Pink.

Isn’t that sweet! Medea partied with Castro’s notorious party girl daughter and fascist-in-training heir to the Cuban throne. She also rallied with the communist front One Billion Rising – she was surely envisioning a Marxist utopia where all suffer equally. Careful what you wish for, you just might get it. Benjamin must have missed the goon squads arresting over one hundred dissidents and throwing them in dungeon-like cells where they will surely be tortured and killed. But, hey! She got to dance on stage with other commies! What a thrill that must have been. I know the arrested dissidents think it is to die for.