Here’s a coincidence. Germany, Sweden, and France have all been taking in unassimilable numbers of refugees from the Middle East and Africa. In all three countries, the results have been the same.

In Germany, crime rates are shooting through the stratosphere:

During the first six months of 2016, migrants committed 142,500 crimes, according to the Federal Criminal Police Office.

And Germany has been hit by a spate of horrendous violent crime including rapes, sexual and physical assaults, stabbings, home invasions, robberies, burglaries and drug trafficking.

In Sweden, the situation is so far out of control that cops are giving up:

The Scandinavian country is facing an existential crisis with on average three police officers handing in their resignations a day.

If the alarming trend continues, and police officers continue to resign more than 1,000 officers will have quit the service by New Years.

Since the migrant crisis began last summer, Sweden has been hit by a series of brutal crimes and violent incidents.

There are now reportedly 52 no-go zones in Sweden. These are Muslim areas that are regarded as unpoliceable. The good news is that the number of no-go zones will soon decline to one. The bad news is that it will take up all of Sweden.

France too is now a war zone:

A migrant turf war erupted into violence on the streets of one of Paris’ trendiest neighbourhoods early [yesterday] morning as asylum seekers beat each other to a pulp with wooden clubs.

The area around Stalingrad Metro station was turned into a refugee battleground as rival gangs of migrants set upon each other in shocking scenes of violence.

Asylum seekers wearing hooded tops wielded makeshift clubs fashioned from lengths of wood which they used to bludgeon each other as horrified pedestrians looked on.

The blood-curdling brawl erupted just yards from the Stalingrad Metro station, where a squalid migrant camp has popped up following the demolition of the Jungle.

The Jungle was a colony Third Worlders had established at Calais as a staging ground for their ongoing invasion of Britain. When French authorities finally did something about it, the colonists turned up in the capital.

The once peaceful neighbourhood, in Paris’ 10th Arrondissement, used to be a popular area with tourists, boasting a lively nightlife scene bustling with restaurants and bars.

But worried residents have revealed how it has become a no go zone in recent weeks following the establishment of the refugee camp, which has brought squalor and violence. …

Residents in the once popular district say that the squatters are now becoming increasingly violent and dangerous, with increased reports of muggings.

But maybe it will turn out differently if we let them flood the USA. Why not try it and see? We have nothing to lose but our country. 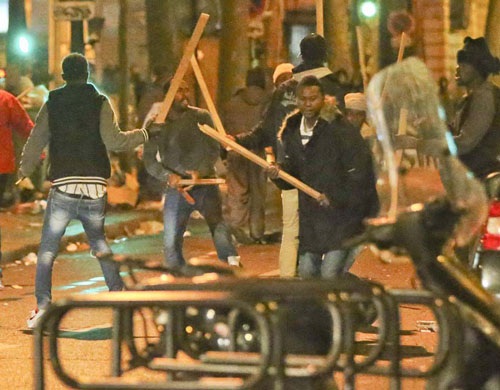 On tips from Rob E, Torcer, and Bodhisattva. Cross-posted at Moonbattery.