Here We Go Again: A Discussion with NumbersUSA’s Rosemary Jenks 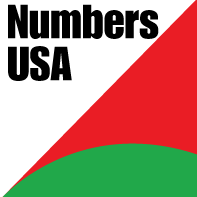 [1]With the “Gang of Eight[2]” announcing their immigration reform package yesterday, I’m sure many American found the deal sensible, rational, and fair. : It’s a bipartisan deal, which pleases the independent segments of the electorate, and has Sen. Marco Rubio endorsing it wholeheartedly. : Immigration keeps the United States economically vibrant, unlike Europe, which has become older, grayer, and more Islamized. : We should welcome immigrants, but not at the cost of undermining our economic interests — which is what: NumbersUSA[3], an organization dedicated to common sense immigration reform, is trying to tell members of Congress. : I was able to speak with Rosemary Jenks, NumbersUSA’s Director of Government Relations, about the new proposal last night.

On NumbersUSA’s website[4], they lay out the details of the package:

: 1. Create a tough but fair path to citizenship for unauthorized immigrants currently living in the United States that is contingent upon securing our borders and tracking whether legal immigrants have left the country when required;

2. Reform our legal immigration system to better recognize the importance of characteristics that will help build the American economy and strengthen American families;

3. Create an effective employment verification system that will prevent identity theft and end the hiring of future unauthorized workers; and,

4. Establish an improved process for admitting future workers to serve our nation’s workforce needs, while simultaneously protecting all workers.

It doesn’t sound like snake oil, but anything from government that sounds too good to be true — tends to be that way. : Case in point, the passing of Obamacare. : However, to low-information voters, or those who aren’t privy to immigration data, it represents, as Jenks said:

…part of the problem with the immigration debate because when you see an outline of a proposal, and you don’t know a whole lot about the issue, it tends to look pretty reasonable.:  It’s only when you get into the details that things start to fall apart. So, you know for example —: the bottom line is that this proposal is virtually identical to the proposal from the Gang of Eight in 2007. And I actually like Sen. Sessions’s title for them better, which is “masters of the universe.”:  They basically have been meeting behind closed doors.:  They don’t allow anyone else into the meetings — anyone who might disagree with them — and then they come out with this grand announcement, and assume that everyone will fall in line and vote for it. But the problem is that this proposal is not well thought out in terms of what’s best for America. And part of the reason for that is that involved in their little secret meetings, and closed-door negotiations, are groups like the AFL-CIO, the Chamber of Commerce, and organized religion, the ethnic advocacy groups — special interest groups have all had their say, but the one group that’s always left out of these negotiations is the America people. So, here we go again — starting this whole process, and we’re looking at essentially the same proposals with the same meaningless so-called triggers that aren’t actually triggers — and massive amnesty.

Closed-door negotiations? It’s a bit ironic that comprehensive immigration reform that intends to keep us an open, immigrant friendly nation needs to be fleshed out in secret meetings. : However, what shocked me was the involvement of the AFL-CIO. : The Democratic wing that’s beholden to union interests have usually opposed illegal immigration since they allow, for example, contractors to underbid union contracts. : Why are they for amnesty? Jenks explains that:

basically, the unions have an interest in amnesty because immigrants, legal or illegal, is the only growing population of union-dues paying members. If they want to continue their dues, the need to legalize the illegal population to keep them here, keep them unionized, and keep them paying dues.:  So in exchange for that amnesty, they’ve made a deal with the Chamber of Commerce, in which the unions give up on guest workers — to get amnesty — and the Chamber gives them amnesty to get guest workers.:  So, everybody wins, except the American worker.

However, Senator Chuck Schumer (D-NY) did say, at the close of the press conference yesterday, that: the proposal will tie[5]: : immigration the influx of legal immigration to the nation’s unemployment rate. : However, Jenks wasn’t convinced that this item in the package will be taken seriously.

: Well, the fact that they’re talking about giving expedited amnesty to AG workers [agricultural workers] and to dreamers — and then some kind of extended amnesty to all of the rest of the eleven million illegal aliens in the country, despite the fact that we have 7.9% unemployment tells me whatever they have in mind for the future is certainly not going to happen because they’ve already vastly exceeded the ability of our economy to employ these people. We’ve already got twenty million Americans who can’t find full-time jobs.:  So, we’re going to add eleven million more?

The growth industries in the U.S. economy are mostly highly skilled, high-tech occupations.:  So, why would we then be giving a massive amnesty —expedited amnesty — to AG workers, and creating a new guest worker program for low-skilled labor?:  It doesn’t make sense.:  We should be reforming our legal immigration system to meet the needs of the 21st: century. Instead of doing that, they’re basically just packing on a whole bunch of new programs that will continue to flood the labor market, primarily the low-skill labor market, and increase the competition for our own most vulnerable workers. And who’s going to pay for it?:  The taxpayers.

Yet, Brad Plumer posted on The Washington Post’s WonkBlog yesterday — and said that illegal immigration has “slowed since 2007[6].” : So, what’s the big deal? : Isn’t that a positive indicator?

there has been — it appears — through some Census data — that the number of new illegal aliens coming into the United States slowed somewhat during the recession, but there’s also evidence that the number has started to pick up again.:  It’s entirely possible that’s because of all this talk of amnesty — but the bottom line is illegal immigration is going to be affected by some small degree by economic changes in the United States.:  But the fact is that the illegal population has stayed at about an estimated eleven million. It hasn’t actually dropped.:  We still have a huge problem, and you can’t stop illegal immigration by redefining it as legal.: :  That’s not a long-term solution.

What alternative policy does NumbersUSA endorse to solve this crisis? : Jenks said that since its inception, NumbersUSA has supported the proposals laid out from the 1995: U.S. Commission on Immigration Reform, which was chaired by former Texas Congresswoman Barbara Jordan. : Jordan, a Democrat, and her commission had these: key points[7]: in their: report[8].

Without a doubt, amnesty will be: unpalatable[9]: to Republicans in the House. : As a naturalized citizen, who immigrated via adoption from South Korea, I want America to remain an open nation. : However, there are rules. : It’s unfair to the legal immigrants to be cast aside because millions of illegals broke the law. : They’ve waited patiently, and now they’re about to be cut in line. : There’s something unethical about it, but we shall see how conservatives react to this new amnesty push — even with the stringent standards attached to the pathway to citizenship.