Jeb Bush, the outspoken former Florida Governor, isn’t ready to confirm any 2016 bid; instead he is more focused on doing what he is best known for, being an ideas man who gets results.

“I have a voice, I want to share my beliefs about how the conservative movement and the Republican Party can regain its footing, because we’ve lost our way,” Bush told Today Show host Matt Lauer on Monday.

Bush said he wouldn’t rule out presidential run, “but I won’t declare today either,” he said to Lauer.

One area Bush is making his voice heard is on immigration and how the GOP’s can better engage Hispanic voters.

This week Bush released a new book called “Immigration Wars: Forging an American Solution[1],” outlining a strategy to help the GOP connect with the nation’s largest minority group and an extensive plan for immigration reform.

Bush, 60, recognizes that immigration is not the top issue for Hispanics and Asian-Americans, two major emerging voting populations. Yet, Bush added, Republicans need to acknowledge that immigration is an important issue to those voters. Bush states immigration is a “gateway. If you set a tone that you don’t want people to be part of your team, they don’t join,” he said.

In 2012, Obama carried Hispanic and Asian-American voters by a 3-1 ratio. 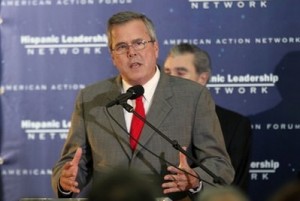 Bush and co-author Clint Bolick, an attorney and vice president for litigation at the Arizona-based Goldwater Institute, argue their immigration proposal is more extensive than the draft from the Obama administration and a more conservative blueprint than the senate outline. Bush argues his proposal is more likely to get through the Republican-controlled house.

One part of his proposal making the news, Jeb Bush does not support[3] the currently proposed pathway to citizenship. A change from his previous position articulated in a Wall Street Journal OpEd [4]he and Bolick authored in January.

“…In the 274-page book, they outline a prescription on immigration that is likely to raise some hackles on both sides. At odds with many conservatives, they support establishing a path to legal status for undocumented immigrants now in the U.S. without setting preconditions on improvements in border security. At odds with many liberals, that path to legal status wouldn’t include citizenship for those who arrived in the United States as adults.”

The book comes at a time when the immigration debate will surely become even more heated as lawmakers move beyond outlines to circulating full legislation. (The book’s publication was pushed up by two months in hopes of having an impact on the immigration policy discussion.)

Later this moth the gang of eight bipartisan senators[6], which includes Florida Senator Marco Rubio, will release their comprehensive immigration reform legislation. They previously circulated an outline of principles.

A group of bipartisan members of House of Representatives[7] are also set to release their own comprehensive immigration bill. According to reports it will include significant difference to the White House and Senate proposals. It will : provide a mechanism to grant legal status to many illegal immigrants, but not include new paths to citizenship.

No doubt, Jeb Bush will make his voice heard. Next week Bush will deliver a featured address at Conservative Political Action Conference (CPAC).

Bettina InclÃ¡n is a Republican political strategist and Hispanic inclusion expert. She is the former Director of Hispanic Outreach for the RNC and worked on Romney for President campaign. You can follow her on twitter at: @BettinaInclan[8].:
Endnotes: