It was an almost unimaginably horrible scene.

In August of 2011, 23-year-old Matthew Denice was riding his motorcycle in Milford, Massachussetts. Denice was hit by a truck driven by drunken illegal alien, Nicolas Guaman, and his body became tangled with his bike and was pinned in the wheel well of Guaman’s truck. 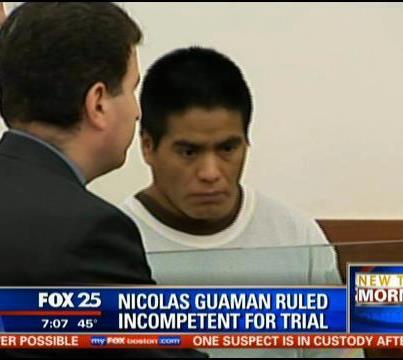 Denice screamed in pain and pounded on the side of the truck.

Guaman ignored Denice’s pleas for mercy and continued driving for another quarter of a mile, dragging Denice along with him until mercifully, his agony was finally ended by death.

Milford Police Chief Thomas O’Loughlin said, “I’ve seen a lot of things in 30 years, and this is right up there. He dragged the guy for a quarter-mile. He was alive for a good portion of it.

In fact, the judge in his case, Janet Kinton-Walker says Guaman’s “unique cultural background” and lack of an Ecuadorian translator have made him incompetent to stand trial. The good news is that Guaman, who never should have been in our country in the first place, hasn’t been released. However, Matthew Denice’s mother, Maureen Maloney, fears that could be a possibility.

“I think this does give the defense attorney the opportunity to request the bail for Guaman. Up until now, he has not been eligible for bail, so he may be eligible to be released on bail because of this recent decision.”

Assuming Guaman doesn’t get on bail and flee, he’s scheduled to return to trial in June. Whether Matthew Denice’s family will be able to get justice within two years of their son’s death remains to be seen.