Nancy Pelosi loses it! Charges at GOP Rep. Tom Marino after getting schooled during immigration debate

All politicians: endure a lot of criticism about their record and: most seasoned politicians: are able to: remain composed, even: when they are confronted with information, analysis or opinions they disagree with. That was not the case last Friday when Minority Leader: Nancy Pelosi (D-CA) got pretty bent out of shape over: comments made by Rep. Tom Marino (R-PA) on the house floor during a debate over the southern border crisis.[1]

The dustup began when Marino accused Democrats of neglecting the immigration issue during their control of the White House and Congress in 2009 and 2010, saying that the party is now exploiting the issue for political gains.

“Under the leadership of their former leader, when in 2009 and 2010, they had the House, the Senate and the White House, and they knew this problem existed,” Marino said. “They didn’t have the strength to go after it back then. But now are trying to make a political issue out of it.”

Soon after he made the remarks, Pelosi, in full view of House cameras, walked across the chamber to the GOP side of the aisle – a rarity in the House – to challenge Marino. 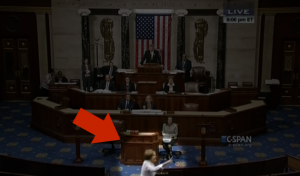 The video of Pelosi charging towards Marino while he is addressing the House is a: perfect display of the typical response from a Democrat faced with the cold hard truth: running around, ranting and: yelling: with arms flapping and fingers pointing.

Despite Pelosi’s interjection, Marino didn’t back down.

After things seemed to calm down, Marino said, “apparently I hit the right nerve.”

Pelosi then walked briskly across the chamber, making a beeline for Marino and shaking her finger at the congressman.

After: Marino yielded back the microphone, Pelosi continued to disrupt order and proceeded to follow him through the chamber where they briefly spoke. : In an attempt to end the interaction,: GOP lawmakers standing nearby reportedly spoke out, complaining that the House was out of order.

Watch the video of Nancy Pelosi losing it:

The House ended up: approving the $694 million immigration bill: by a 223-189 vote but drama continued later that evening when: Rep. Marino took to twitter to address a comment made by Pelosi in which she called him: an “insignificant person.” 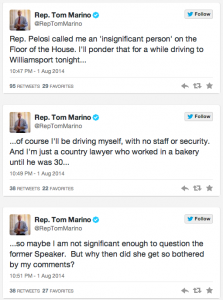 Clearly Marino was significant enough to warrant Pelosi stomping across the chamber twice, in full view of the House cameras, in order to address him face to face. Or maybe the truth was: just dangerously significant and like Marino said, it hit “the right nerve.” Either way,: disrupting the order of the House with recriminations to the point of open cries and gaveling for order is unacceptable behavior, even for a Democrat.