Surprise: Many In 1st World Do Not Care About Trump’s “Sh*thole” Remark 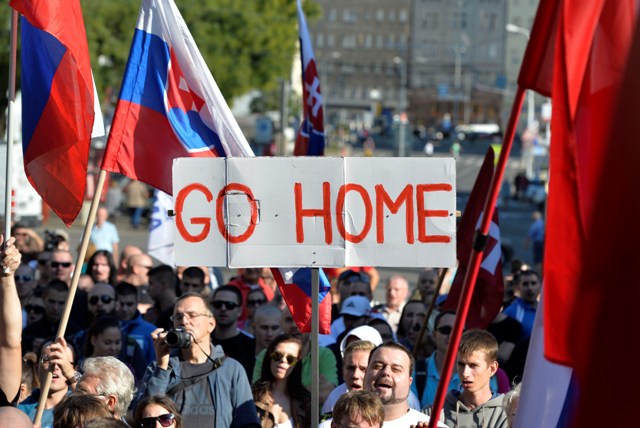 Participants hold flags and a banner during an anti-immigration rally organised by an initiative called “Stop Islamisation of Europe” and backed by the far-right “People’s Party-Our Slovakia” on September 12, 2015 in Bratislava, Slovakia. AFP PHOTO / Samuel Kubani

First off, the “shithole” remark is basically a he said/she said thing. Many claim Trump said it, many said he didn’t. And, really, the more the media and Democrats run with this, the chance for some sort of fix for the Dreamers keeps going down. But, what about around the rest of the 1st world?

Trump’s Immigration Remarks Outrage Many, but Others Quietly Agree[2]

The Czech president has called[3] Muslim immigrants[4]criminals[5]. The head of Poland’s governing party has said refugees are[6]riddled with disease[7]. The leader of Hungary has described migrants as a poison[8].

So when President Trump said he did not want immigrants from “shithole” countries[10], there was ringing silence across broad parts of the European Union, especially in the east, and certainly no chorus of condemnation.

In fact, some analysts saw the remarks as fitting a pattern of crude, dehumanizing and racist language to describe migrants and asylum seekers that has steadily edged its way into the mainstream. Coming from the White House, such words may be taken by some as a broader signal that racism is now an acceptable part of political discourse.

They love throwing around the raaaaacism word, don’t they? But, there’s a little bit of unintentional journalism in this

But the political reality is that migration has become a salient issue — and not only for right-wing, populist and nativist politicians. Across many affluent societies, people are anxious about technological change, rising inequality and stagnant wages, and they have focused their ire at the global flows of capital and, especially, labor. There are also concerns about demographic change, as the world becomes less white and as western societies age.

Moreover, the chaos and violence that have driven people from the Middle East, Southwest Asia and sub-Saharan Africa to seek to live elsewhere, even as far away as Australia and Canada, have also raised fears about refugees who do not appreciate the values of the countries hosting them — or even worse, fears of terrorists taking advantage of humanitarian policies to infiltrate societies and then carry out attacks.

Yes, people are very concerned about all these “refugees”, “migrants”, and illegal aliens streaming from shithole areas around the world into 1st world nations, bringing the same shithole values with them. In Europe, people are dealing with rape and crime epidemics, neighborhoods are being turned into 3rd world cesspools, cars are being burned, gangs run rampant, and, as much as Leftists want to dismiss it, there are no go zones where police won’t go. There are sexual grooming gangs. People are afraid to go to public swimming pools. Women are told to dress demure so they aren’t sexually harassed and even assaulted. They’re bringing their Sharia law and 9th century beliefs with them.

Sure, there are some good ones. But, how many still refuse to assimilate, and also demand that the nations change for the immigrants?

At the end of the day, nations have a responsibility to limit who they let in. Their first responsibility is to their citizens, not people bringing incompatible values