Gag worthy.[1] Pandering in Spanish, Jeb Bush shows just what a partisan political hack he really is. He plays the racism card immediately, doing all Marxists proud. He even blathers on about ‘haters.’ Right out of the Progressive playbook. Then Bush moves onto dismissing Donald Trump. He’s a fool and arrogant. I hope Trump wipes the floor with him. I can’t think of another candidate on the Right that is despised as much as Jeb Bush and justifiably so. Then he went whole hog on defending illegal immigration and Amnesty. Why not? He’s being interviewed by a died-in-the-red-wool Marxist journalist from Telemundo. Telemundo who is being sued by Trump for breach of contract. They are a dishonest sycophant tool for the Leftists. This was a carefully scripted interview with select topics that were crafted specifically for Jeb Bush. Looks like he’s rocking the Marxist vote. 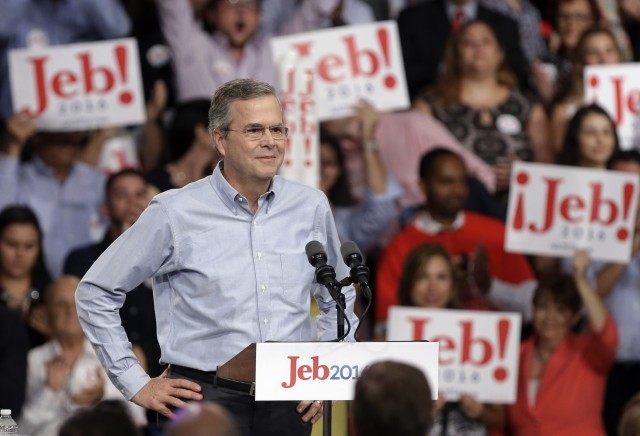 MIAMI (AP) — In his first Spanish-language television network interview since launching his 2016 presidential campaign, Republican presidential candidate Jeb Bush fielded questions ranging from the upcoming presidential debate to Donald Trump, from Latin American foreign policy to his favorite music, and whether he had ever experienced discrimination.

Bush shared experience his son George P. Bush, who is now 39 years old, had when he and his Hispanic teammates traveled north to Ocala, Florida, to play in a baseball game.

“George, he’s dark-skinned, and they spoke horrible things about those from Miami,” Bush recalled, without offering details. “I had to explain … that people who hate are not the majority, and we must accept them and move forward.”

Bush, who is fluent in Spanish and speaks the language at home with his Mexican wife, Columba, has been busy this week courting minority voters.

On Friday, he spoke to hundreds attending the National Urban League in Fort Lauderdale and last Monday was in central Florida at a luncheon with a diverse group of pastors and other religious leaders, many of whom were Puerto Rican.

When asked in the Telemundo interview about billionaire Republican rival Donald Trump, who several national polls show is leading the GOP presidential race, Bush said “I’m not too concerned about that.”

He said he planned to focus on his record as Florida governor at next Thursday’s Republican debate in Cleveland, the first of the 2016 presidential campaign. As governor, he said, he cut taxes, reformed education and grew the Florida economy.

Pressed by Diaz-Balart about immigration reform, Bush promised he would make the issue a top priority if elected president.

“To arrive here legally has to be easier than to arrive here illegally,” said Bush. Like other Republicans, he wants to see U.S. borders secured before allowing the country’s estimated 11 million immigrants in the U.S. illegally to obtain legal status. “I know we can do it,” he said.

On foreign affairs, Bush was critical of President Barack Obama’s new Cuba policy, wants the U.S. to be more active in its support of dissidents in Cuba and Venezuela and said Congress must act to help Puerto Rico deal with its debt crisis.

“We should assist as much as we can,” Bush said, of Puerto Rico.

As for his favorite music, Bush said he loved country, Christian, rap and Latin. He said he became a recent fan of Pitbull, the wildly popular bilingual rapper from Miami (“I listen to his music) and has been a longtime fan of Michael W. Smith, a Grammy-winning Christian music star (“Got a great voice”).

Bush is pushing a bailout of Puerto Rico. Dude… we are bankrupt. Didn’t you get the memo? Or is your answer just to print more money? Puerto Rico is circling the drain. Let them go down and don’t let them pull us with them. Unless of course Bush’s plan is to do just that – take us down once and for all financially so the country can be reformed into something more visionary. Maybe in chic red commie leather. By the way, Bush isn’t concerned about Cuba really. If he doesn’t give a crap about the borders, what are a few more revolutionaries and communists coming to America to him? Bush supports Common Core as well as the climate change hysteria, so his idea of education reform is controlled fascism. Yep, he’s a real winner. Just say no to the Bush dynasty.