Watch Ann Coulter Completely Crush the Hosts of “The View”

I disliked writing this article because it forced me to watch 8 minutes of the worst show in the world, but at least Ann Coulter crushes the hosts of The View[1], especially self contradicting Raven-Symon and her hideous wannabe Skrillex buzzcut. 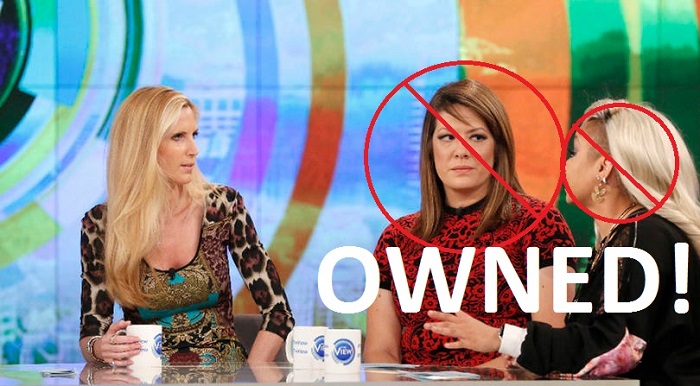 “My mom taught me when I was younger ‘if you don’t have anything nice to say don’t say anything at all,” Symone said. “Why do you think that it’s important to mudsling and have these words that obviously touch the hearts and souls of so many people in America being said when you were taught something different as a child?”

“Well, I’m at least talking about policy. You have a position on what people’s names should be! I mean, Watermelondrea. I mean, you’ll insult people for their names,” Coulter shot back, referencing a recent comment Symone made about black names that had social media outraged.

“I’m talking about a government policy that affects all Americans, and immigrants, and the people living here. And it’s harming our country. So you don’t follow it.”

BOOM! OWNED! When you get owned that hard on national television, then Steve Wilkos should appear out of a genie bottle and escort you off the stage and into a black hole. BYE FELICIA!

“The View” is a complete embarrassment to America and the people who watch it must be brain dead.

I guess there has to be something BAD on TV, right?