Obviously, these are just a bunch of poor[1], helpless women and children seeking asylum… not. Muslim refugees in Macedonia, which is in Greece and in the southern Balkans, decided to get their violence on this weekend. How did they do it? Well, they stoned the police, while chanting their Islamic war cry. Good thing the police had shields and helmets. There’s nothing like being stoned to death by a bunch of savages. They should have just shot them. I don’t know why authorities are tolerating this sort of murderous thuggery. Why don’t they fight back? This is not the kind of immigration any country wants, trust me. 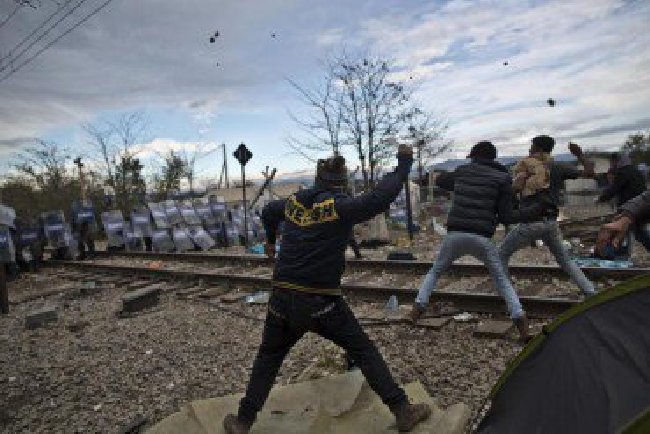 This weekend Muslim “refugees” chanted the Islamic war cry as they stoned police at the border with Macedonia.

They ought to make wonderful citizens.

18 officers were injured in the attack.

Macedonia’s interior ministry says 18 police officers were injured in a clash with a group of stranded migrants on the country’s southern border with Greece.

The ministry says two of the officers have been hospitalized in the border town of Gevgelija.

The clashes erupted after a 24-year-old Moroccan migrant suffered severe burns when he touched a high-voltage cable on the Greek side of the border.

The migrants, already angry about the fact that Macedonia has started to erect a fence on the border, started throwing stones at police officers who were cordoning off the official checkpoint. Some police vehicles were also damaged, the ministry says.

The protesters demanded entry into Europe.

This is a brutal invading force and these kind of skirmishes and attacks are bound to get worse and a lot more lethal. 18 officers were injured in this attack as these barbarians demanded to be let into Europe. I’m surprised no one was killed. Can you blame the Greeks for hating these thugs? These Jihadists don’t like the fact that Macedonia has started building a fence to keep them out. Hey America, this is what Obama is bringing into our states, cities and neighborhoods. Looks like fun, huh? Imagine if your children or family got caught in the middle of that. These scum can throw rocks at the police, but they can’t fight for their own country. They are simply an invading force – they are the Hijrah migration. 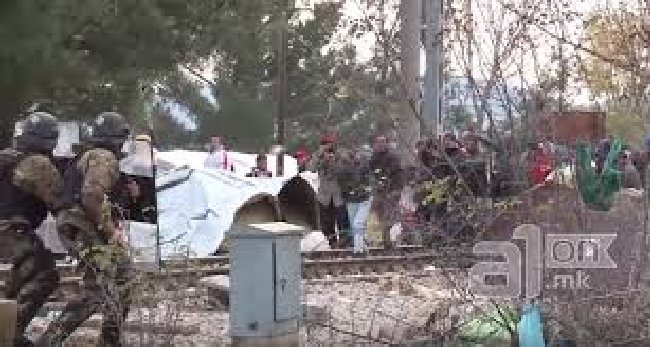