A Father Breaks the Law to Buy Time With Brain-Dead Son, But Then Something Happens

How far would you go to save your child’s life? One father broke the law to buy his son, who doctors said was brain-dead some time, and then a miracle happened. 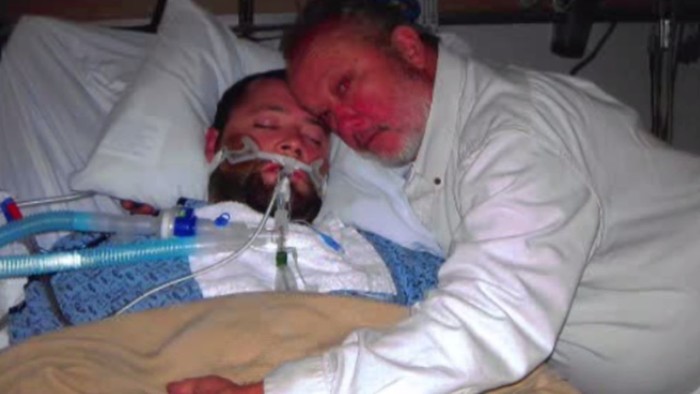 KPRC reports that last January, George Pickering II took a gun to the hospital where his son was being kept on life support, and was involved in a standoff with police.

Pickering said his son, George Pickering III, had suffered a massive stroke. Pickering told KPRC that doctors said his son was “brain dead” and a “vegetable” and they were slowly removing him from life support.

But, Pickering said the doctors were moving too fast. “I knew if I had three or four hours that night that I would know whether George was brain dead or not,” he said.

During the standoff, which lasted several hours, Pickering said his son squeezed his hand three or four times. That’s when Pickering surrendered.

Amazingly, his son recovered from the stroke and is fine today. “There was a law broken, but it was broken for all the right reasons. I’m here now because of it,” said Pickering’s son, George III.

Pickering was sentenced to time served in jail for the standoff.

There’s likely no one alive that can’t sympathize with Pickering’s decision to do all he could to save his son. But what he did was obviously very, very wrong, and he should be thankful that it all ended as well as it did.