There is nothing like the bond between siblings — they may fight sometimes, but it’s undeniable that they love each other, too. Fourth grader Annie LaForge showed just how much she loves her little brother when she worked all year to get a perfect attendance award… and then gave it away. 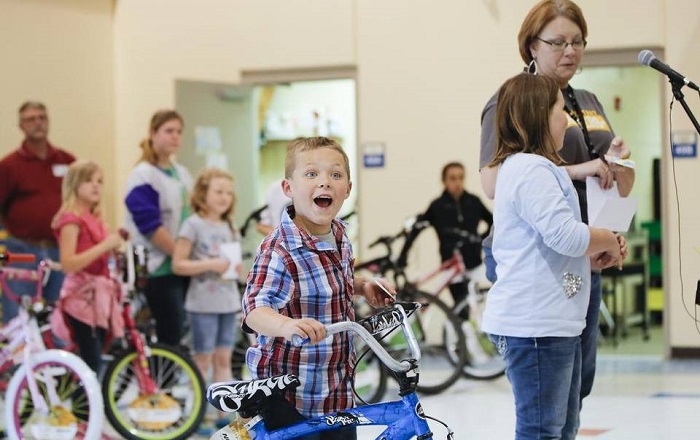 It’s not an easy thing to get perfect attendance, so Payne Elementary School in Wichita, Kansas has the perfect way of rewarding the students who achieve it: they each get a brand new bike.

As the Wichita Eagle reports, the bikes are provided by Globe Engineering, a local business and sponsor of the school. At the end of every school year, a school-wide assembly is held and students are given their awards —including the bikes, which are carefully chosen based on the age and gender of the child who earned it.

So why did Annie LaForge, a fourth-grader, end up with a bike more suited for someone much younger? Because she asked for it.

Principal Donna Simpson says that Annie came to her a few weeks before the assembly and asked that her bike be given to her brother Tom, a first-grader at the school. The request was a first, and left Principal Simpson deeply impressed with Annie’s selflessness. Annie told the Principal that she already had a good bike, but that Tom’s birthday was coming up in June and she wanted to be sure her little brother got a great present.

… At the school assembly, Annie was able to surprise her delighted brother with the new bike, then got a surprise of her own. The coordinator of the bike giveaway at Globe Engineering was so touched by Annie’s thoughtfulness that they made sure Annie got a gift as well — a $100 gift card to Walmart.

It’s fitting, however, that despite how much she impressed the adults around her, Annie’s thoughts were on her brother when the ceremony was over. Her favorite part? Not the gift card, but her brother’s face when he got his new bike.

How many children are willing to work all year long to give someone else something special? The kind of selflessness and generosity that Annie showed is something that we could all seek to emulate more often.