Peter and Grace Bilello had been married for over forty years when Grace was diagnosed with cancer — and sadly, she ultimately lost her battle. But he got what can only be described as a message from his wife that she was still with him when a cashier at Subway handed him a treasure he lost years ago. 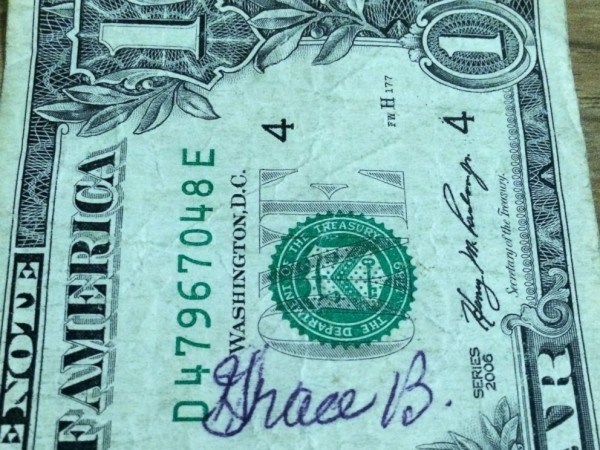 While Grace was still battling cancer in 2009, Peter came up with the idea that they would each sign a dollar bill, “Grace B.” and “Peter B.,” and that he would keep those dollars in his wallet, forever.

Why did he decided that they would sign dollar bills? Peter isn’t sure, it just “came into his mind.”

However about a year later, while he was out grocery shopping, he accidentally used those two dollars to make a purchase.

“By mistake I went shopping,” he says. “I don’t know where I used the 2 dollars. I came home and told my wife… ‘Grace, I made a big mistake today. I’m never going to see the dollars again.’”

And then something happened.

Last week, Peter was out with his 14-year-old granddaughter, Ashley, for lunch.

He gave his granddaughter $10 to pay the bill and when she returned with the change, Ashley handed her grandfather a bill they’ve seen before.

It was the dollar bill that was signed “Grace B.”

“I said, ‘Oh my God, Ashley, look.’ We started to cry,” Peter recalls. “We were so happy to get the dollar back. I never thought I’d get that dollar back.”

It wasn’t until Peter’s reaction did Ashley realize what she had just returned to her grandfather.

“I told my granddaughter, we’re going to go straight to the cemetery, and tell nonna, my wife, that we got the dollar back.”

“I showed the dollar to my wife and said, ‘Grace, look, I got your dollar back.”
That dollar is now in a safe place and Peter credits Grace with making this miracle happen from above.

That chances of him finding that dollar again must have been beyond remote, but somehow, he still got it back again. It’s a heartwarming story, not because of a dollar… but because it shows the incredible love between this man and his wife that even death couldn’t take away.