Sometimes, people pleasantly surprise you[1] with their giving spirits. A little boy has a stuffed tiger named Hobbes that his aunt made for him. Owen takes Hobbes everywhere and then tragedy strikes. He’s flying with his parents from Tampa to Houston to visit family and the unthinkable happens… Hobbes gets left behind somehow. Owen was bereft, so his mother called the airport to see if they could find Hobbes. They did, but Hobbes went on a grand adventure while waiting for Owen to return. Tony D’Aiuto, the airport operations center manager, went with Hobbes all over the place taking pictures and making a book for little Owen. It’s one of the kindest things I have ever heard of – it was a wonderful thing to do for that little boy. 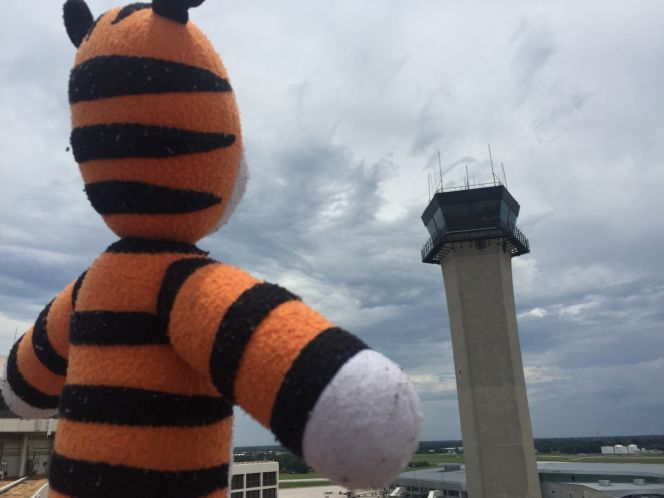 From the Tampa Bay Times:

Hobbes the stuffed tiger went on an adventure at Tampa International Airport.

The plush toy, which belongs to 6-year-old Owen Lake, was left behind in the Tampa airport as Owen and his family traveled to Houston recently for a family member’s high school graduation. His mother, Amanda Lake, reached out to the airport when her son learned the toy was missing and became distraught.

“Hobbes is one of a kind. He was made by hand by his aunt who lives in Houston,” Lake said.

Airport staff found the toy, then decided to take his rescue a step farther.

Tony D’Aiuto, the airport operations center manager, took Hobbes on adventures all over the building. He photographed the stuffed animal at the air traffic control tower, indulging in some gelato, working out at the employee gym and hanging out with airport firefighters.

Hobbes even lounged at the Marriott pool and rode around on a luggage cart.

“I pitched this idea a couple of months ago after I saw a similar idea where someone took a stuffed lion around a museum,” D’Aiuto said in a statement put out by the airport on Monday. He noted that the photos were taken during his lunch hour. “This seemed like the perfect opportunity.”

D’Aiuto had a hardbound book made, thanks to a coupon code he had for Walgreens, and crafted a short story that explained Hobbes’ airport adventure.

Owen was reunited with his toy when he and his family returned from Houston on a late-night flight Thursday. The toy was waiting for him, with the book, in the airport’s lost and found.

Owen’s mother was in tears when she saw the gift.

“When Owen asked for Hobbes on the plane, my husband and I looked at each other and our hearts sunk. We knew he was left behind,” Lake said. “Owen really loves him. He’s special, and we are so thankful for the airport and what they did.”

What a ride Hobbes had! He went to the pool, to the gym and to the air traffic control tower. He got to visit the attendants who help people and the airport firefighters. He visited the cafeteria and posed with baggage handlers. Hobbes rode luggage carts and got to play games with others. When Owen returned and found his best friend safe and sound, he also received a book that showed all the adventures he had while Owen was gone. The sheer happiness and joy on Owen’s face could melt your heart. Airport personnel gathered around to cheer on the happy reunion and see the magic of best friends sharing each other’s adventures – this time for realsies. 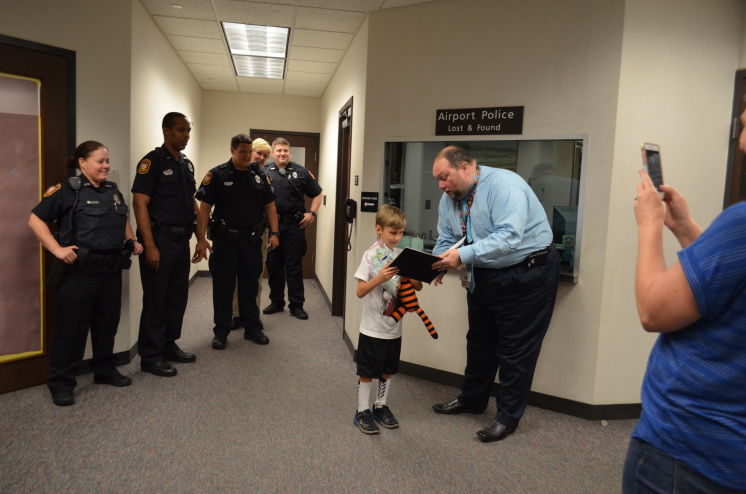