[INCREDIBLE VIDEO] Russian Hiker Performs Surgery on HIMSELF on a Mountaintop

This incredible video of a Russian filmmaker performing surgery of himself is absolutely gut-wrenching. He had to use the top of a mountain as his operating room using only tools from his first-aid kit. More details on his awesome ordeal:[1] 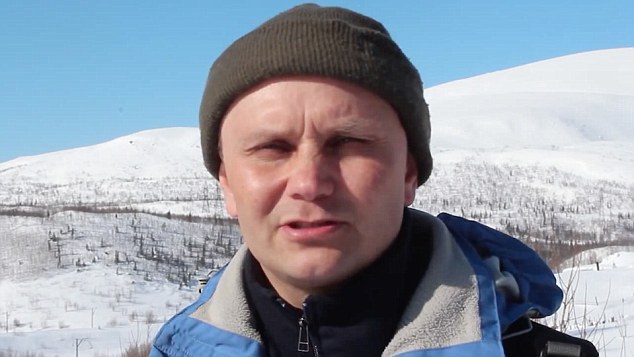 The Russian man, who was filming a documentary in snow-covered mountains, found himself injured and unable to continue the ascent.

It is believed the man, whose nickname is ‘Che’, was struck by a huge falling icicle, causing a collection of blood under the skin called a hematoma.

The blood formed a clot which caused a huge swelling and bruising, leaving him in pain and unable to walk.

Carrying out the operation – with some surgical instruments he had in his backpack – was ‘the most reasonable and effective action’, he said.

Viewers must be aware the footage contains extremely graphic content.

First, he decides to use snow as an anaesthetic, and rubs it on his leg to numb the injury.

Then, he burns a scalpel on a gas torch in order to make it sterile.

‘Now it is possible to start the operation,’ he explains in the video.

In the original film, which has been edited by MailOnline, the man is seen making a deep incision into his leg with a scalpel, and blood is seen flowing out.

He reaches into the cut with his fingers and scoops out the coagulated blood – almost black in colour – which had formed into a clot.

With no sign of pain – or any emotion at all – he says: ‘As you can see here it isn’t necessary for special anesthesia, snow perfectly coped with this task.’

He cleans away all the clotted blood, until fresh, red blood is seen.

He then pours hydrogen peroxide on the wound to clean it, which fizzes and clears away the blood.

Hydrogen peroxide is commonly used as an antiseptic.

Che has recovered now and hardly even has a scar. Wow. I’d like to say I could do the same thing if I was in this guy’s shoes, but I don’t think I am that brave. Che is an amazing example of what the human species will do to survive if needed. Simply amazing. 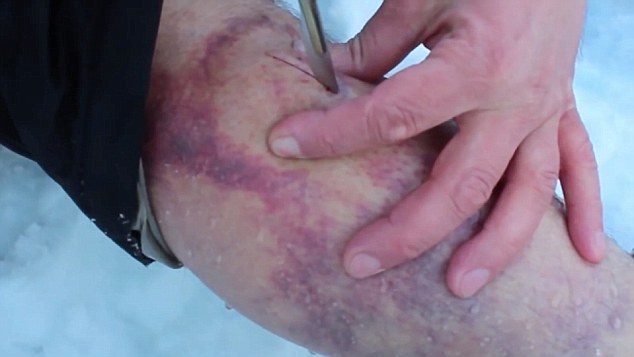 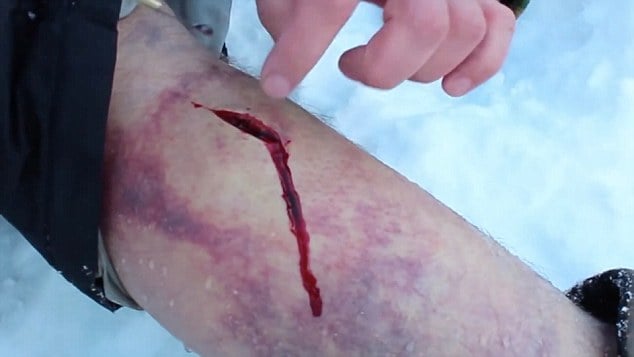 WARNING! **NSFW** THIS IS A GRAPHIC VIDEO CONTAINING A REAL, AMATUER SURGICAL PROCEDURE. PLEASE DO NOT TRY THIS AT HOME.