One of my very best friends, Trevor Loudon, is from New Zealand. So, I knew they made them strong and brave there. This confirms it. A 63 year-old woman had her car plunge into a harbor. She was minutes from drowning, when two hero cops broke her back window with a big rock and pulled her to safety. The car sunk 40 seconds later. To these two, it was just another day on the job… to the woman they rescued, it was her lucky day[1]. 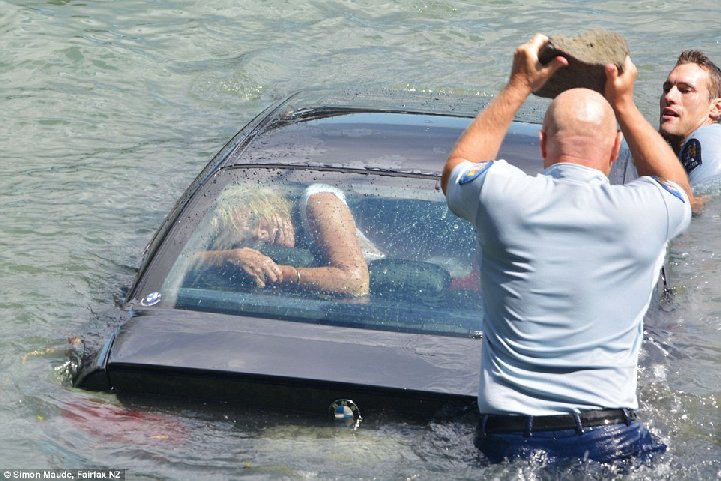 The petrified woman was squashed up against the rear window as the front end of the car was rapdily submerging into the Waitemata Harbour in Auckland, New Zealand, at 3pm on Tuesday. 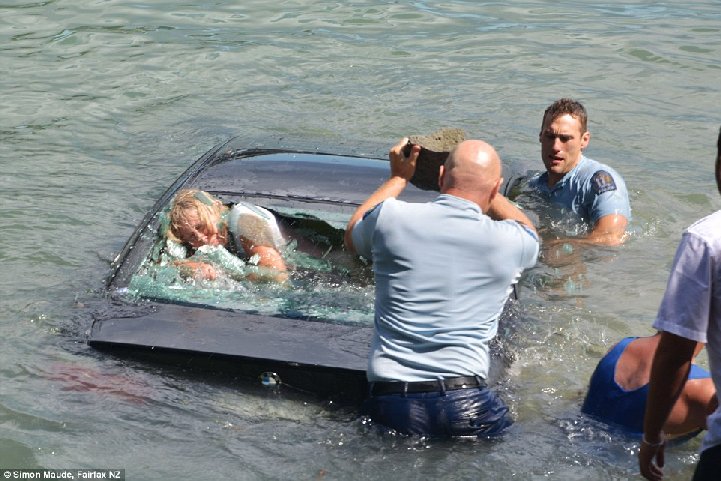 The quick-thinking policemen, Paul Watts (left) and Simon Russell (right) arrived and sprung straight into action by jumping into the water with Russell attempting to smash the driver window with a spanner before Watts smashed the rear window with a rock. 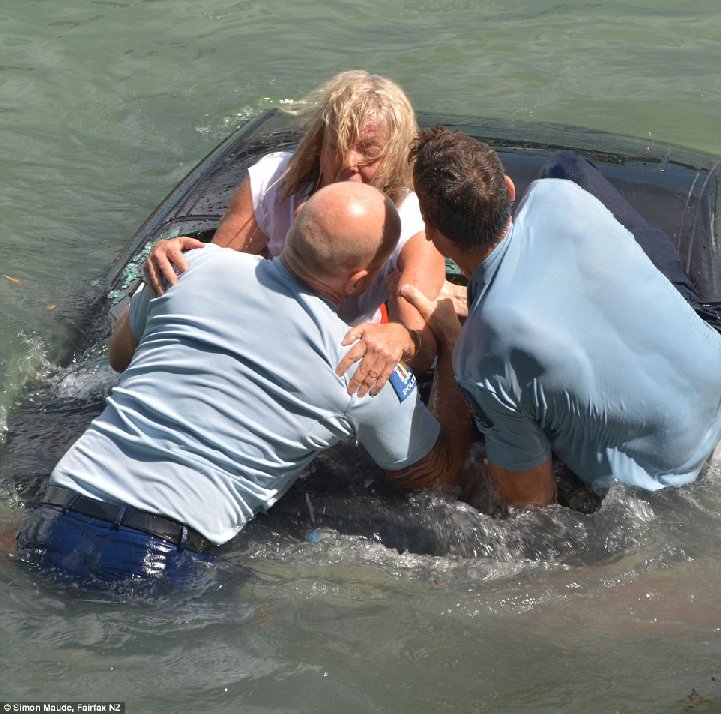 Officers Watts (left) and Russell (right) then dragged the relieved 63-year-old woman from the car to safety.

The brave and quick thinking efforts of the two police officers who saved a woman just seconds from drowning in her car after it plunged into a harbour have humbly insisted their heroic act was all just part of the job.

Incredible images show officers Paul Watts and Simon Russell rescuing the petrified 63-year-old woman from the car, which was rapidly sinking into Waitemata Harbour in Auckland at 3pm on Tuesday.

Watts modestly described the dramatic rescue as ‘pretty much part of a routine job being a police officer’, saying the whole rescue only took about 40 seconds – and that 40 seconds later the car completely vanished beneath the water.

The courageous officers received a call from New Zealand Police Commissioner Mike Bush on Tuesday afternoon to commend them on their efforts. Russell told the commissioner, ‘it’s just another day on the job, sir’, stuff.co.nz[2] reported.

The woman is extremely lucky to be alive after her car careered off a rock wall of a car park into a New Zealand harbour and immediately began sinking at a frightening speed.

The terrified woman, who is yet to be identified, was squashed up against the rear window as the front end of the BMW was rapidly nosediving into the harbour

The officers and a bystander couldn’t open the car doors so Russell attempted to break the driver window with a spanner that he found on the ocean floor when he cut his left hand.

‘When we entered the water, I was talking to one of the (members of the public) who was trying to balance the vehicle and he said he was looking for a rock to try and smash the window,’ Russell told the New Zealand Herald[3].

He said once his spanner failed his fellow officer Watts successfully smashed through the rear window with a rock – by which time the car was sinking at an alarming rate.

‘At that time the car actually started to move very fast into the water. I was trying to hold the car, slowing it down from entering the water,’ Russell said.

The officers then managed to pull the woman from the car to safety, but said they got her out just in time.

‘It was pretty close, probably 30 or 40 seconds after we managed to get the female out of the car, the car was already slipping further into the water,’ Watts said.

‘I’d say she’d probably only had maximum probably another minute, minute-and-a-half if she hadn’t got out,’ he said.

The car was fully submerged less than a minute after the woman was freed from it.

He said the woman, who was in shock, got away with just a ‘few cuts and bruises and is lucky to be alive,’ stuff.co.nz[4] reported.

Erwin Kampos was fishing as he saw the BMW go straight into the water after driving over the Northcote Point Ferry Terminal’s car park rock wall, and he immediately went into the water to attempt to smash the window.

‘The two police officers smashed the back windscreen, I tried to smash the sides and they didn’t want to break. We were running out of time because the vehicle was filling up,’ he said.

Another witness saw the car was ‘filling up fast’ and said the officers get to the woman ‘just in the nick of time.’

The woman is now in hospital in a stable condition and is expected to make a full recovery.

Another hero is Erwin Kampos who was fishing when it happened. He did his darndest to get her out, but couldn’t. Then Officers Watts and Russell arrived to save the day. It all happened very fast. The terrified woman was pressed up against the back window with nowhere to go. The car doors would not open. They are still not sure how her car got over the rock wall into the harbor. She will be fine now – only cuts and bruises, but she had the scare of her life. It takes a special kind of person to be a cop. To put others before yourself in life and death situations. The bravery and quick thinking of the officers was impressive. All of us should thank the police way more often than we do.