Plenty of parents say that they are willing to die for their children. But one selfless mother, Ashley Caughey, proved that she actually means it, when she chose to forgo chemotherapy in order to protect the life of her unborn child. 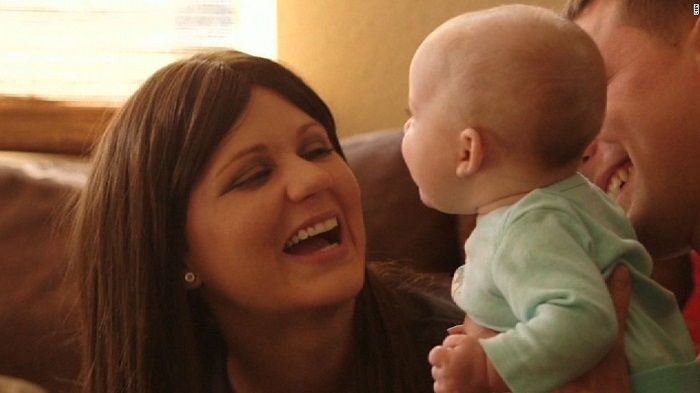 Doctors say 24-year-old Ashley Caughey has only months to live after malignant bone cancer spread unchecked throughout her body.

She worries she won’t see her daughter Paisley’s first birthday, the little girl she refused chemotherapy treatment for in order to give birth to her last year.

CNN reports she had just gotten engaged to her now-husband Jonathan when she faced a gut-wrenching diagnosis – a cancer called osteosarcoma had developed in her leg.

Caughey had suffered aches in her knee since 2012, but it wasn’t until the pain sent her to the hospital that the invasive bone cancer was discovered.

‘The doctor that I went to repeatedly and repeatedly telling him something wasn’t right probably cost me my life,’ Ashley says, adding, ‘I could have had more time.’

She was sent to surgery to remove her knee and femur, and doctors advised her to begin chemotherapy treatment.

Caughey refused, as the treatment would have put her 10-week pregnancy at risk.

‘I’m not going to kill a healthy baby because I’m sick,’ she says. ‘There’s nothing wrong with her.’

She gave birth to a daughter, Paisley, in June, but shortly after the delivery, she received more bad news that the cancer has spread throughout her body and even to the brain.

‘When they told me that, I think “Oh my gosh, I am really dying. I’m not going to beat this,”‘ says Caughey, who tries to stay hopeful in the face of unrelentingly bad news.

If Caughey does not survive her cancer, then it will be an awful tragedy. But her children will grow up knowing that their mother loved them so much that she was willing to die so that they may live — and that is an act of selflessness that cannot be replaced.