This woman is incredible.[1] She still finished with six seconds to spare even though she ran for three miles off course. Simply impressive and at the age of 71. It makes me feel like a slug. It’s hard for me to wrap my head around a 100-mile ultramarathon. I have a friend that competes in the Ironman Triathalon and I’m in awe of him as well. He’s competed for years in it, just as this woman has ran for years. She’s ran over 260 marathons. Swanson is the first woman over 70 to complete the race and is the very definition of an athletic competitor and winner. Well done. 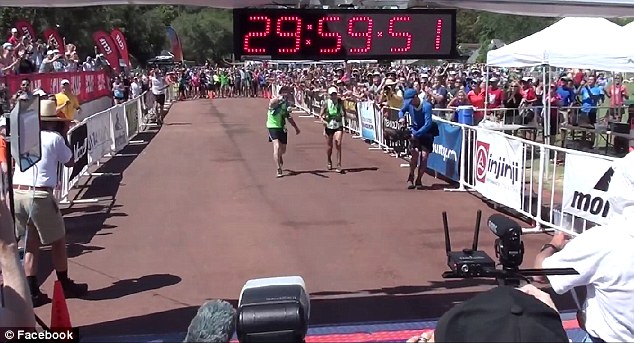 This is the incredible moment a 71 year-old Gunhild Swanson was mere seconds away from finishing the 100-mile ultramarathon at the Western States 100 in California, just six seconds before the 30-hour cutoff time.

This is the incredible moment a 71-year-old grandmother finished a 100-mile ultramarathon with just six seconds to spare before the cut-off time.

Gunhild Swanson may have crossed the finish line last at the Western States 100 in California, but she stole the show by becoming the first woman over the age of 70 to finish the race.

Swanson’s time clocked in at 29 hours, 59 seconds and 54 milliseconds, but the ultrarunner wasn’t sure she would make the 30-hour cutoff after she went off course in the middle of the race.

At mile 88 Swanson and her pacer followed a couple runners in front of them, instead of looking for the markers. The mistake added three extra miles to her already brutal race.

‘The terrain is so difficult that ordinary mortals like me, you can’t run,’ she told iRunFar.com[3].

‘You have to power walk it and hike it, so I just kept getting further and further behind.’

By the time Swanson reached the 90-mile marker, Swanson was back within reach of the cutoff time – but she wasn’t sure she had it in her to make it.

‘I can’t make it up. I don’t have enough legs to make it up,’ Swanson recalled thinking at that moment. ‘I thought I was done. Physically I just couldn’t do it.’

But Swanson’s pacers, including her son and grandson, and the crowd gave her the encouragement she needed to keep on going.

She was joined on the course by friends, her pacers, and even the winner of the race as they began pouring ice water on her and telling her she had to give everything she had.

Swanson said one of her friend’s checked the clock and saw she was running 7-minute miles on the last leg of the race’s track, covering the last 1.3 miles in 16 minutes.

The crowd erupted in a long round of cheers and applause as Swanson crossed the finish line.

‘I must have had the biggest smile on my face,’ she said. ‘It was just overwhelming. I finished this sucker.’

Sunday’s race is just one in a long list of Swanson’s accomplishments.

The mother-of-four, who moved to Spokane, Washington from Germany in 1963, has been competing in ultramarathons since 1987, she told iRunFar.com[4].

And Swanson’s run at the Western States 100 this weekend wasn’t even the first time she broke a record at the California race.

When she made her second appearance at the ultramarathon in 2005 she set the record for women between 60 and 69 years of age – and her time has yet to be beaten.

But for Swanson it has never been about records or glory or fame – but for adventure.

‘No matter the distance,’ she said. ‘No matter what race it is. I love adventures.’

This is a mother of four. Not sure how many grandchildren she has, but what an inspiration she is for all of us. She didn’t give up – she finished the course even when she thought she couldn’t. I used to run long distance, but not anything even close to this. And after all that distance, she was running 7-minute miles on the last leg. Whoa. The woman is a machine. Her smile was infectious after crossing that finish line and the crowds erupted into mass cheering. They roared for her. She definitely loves adventure and the people love her.