VIDEO: Photographer Rescues Missing Woman Who Was Found Frozen to the Ground

Sometimes, fate just puts us in the right place at the right time. And for one photographer, fate led him to rescue a missing woman that he found outside in the bitter cold, frozen to the ground. 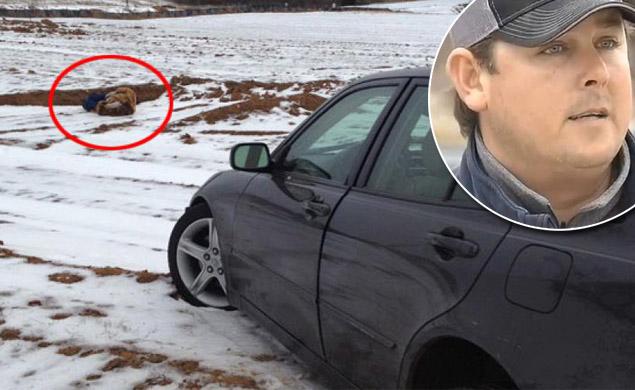 “I’d taken this right before I came out and found her,” Sheldon said.

Last Friday, Sheldon took the day off to take pictures of the ice and snow in Franklin. As he went to leave, he realized the road was too icy and turned around.

As he turned around, he noticed a gray Lexus stuck in a ditch.

Sheldon started taking pictures of the car, thinking it might belong to someone at a nearby church.

“As I was taking my third photo is when I noticed the lady in front of the car,” Sheldon said.

Not knowing if she was dead or alive, Sheldon called out to the woman. She was unresponsive.

“I walked over to her and when I got next to her, she opened her eyes,” Sheldon said.

Sheldon didn’t know how long the woman had been there. It was 15 degrees outside at the time.

… It turned out Patricia had been reported missing by her family two days earlier. According to the missing person’s report, she has several brain injuries from horseback riding.

The woman reportedly told her family she was heading to Winner’s Circle Farms in Franklin, but never made it there.

“Part of me wonders if I hadn’t come up, I don’t know how long anyone could live in that weather,” Sheldon said.

It’s not much of a guess to say that if he hadn’t come along and found her, she probably would have died. Something brought him to that area that morning, and thank God it did, because if he hadn’t been there, one family would be going through a lot of sadness and grief right now.