When A Cop Saw This Kid Living In A Car With His Family, His Reaction Shocked Me To The Core [Video]

This is a wonderful story[1] and Officer Natt has a heart as big as Texas, even if he does live in Oregon. When he found this family sleeping in their car after traveling from Alaska back to Eugene, he knew he needed to help them. Usually, you would think an officer would tell the family they had to move along because it is illegal to sleep in the park, or some such nonsense. They were trying to save money by sleeping in the car. The family included a father, two very small boys and a pregnant wife… no wonder Officer Natt decided this needed to be taken care of. There is a church fund for cases the police deem worthy and this fit the bill. So, the family was put up in a hotel for two nights and a place was found where they could live and get back on their feet. At first the father turned down the offer twice, but Officer Natt was insistent and a happy ending ensued. 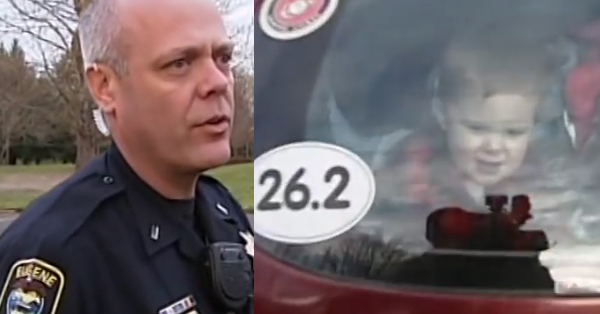 When Police Officer David Natt discovered a family sleeping in their car at a public park, he could’ve easily followed the trend of negative stories in the news about officers and kicked the family out. But instead, he insisted they let him provide a hotel for them and his act of kindness has gone viral.

Robert Wood was with his two young sons and wife (who is expecting their third child) in the parking lot after a long journey from Alaska. Without a place to live and low on money, their car was the best shelter option for this family of almost five.

Wood declined the generous offer at first but thankfully Officer Natt’s persistence to provide them a secure shelter paid off. With the help of University Fellowship Church, the Eugene Police Department was able to pay for two nights at a hotel while they searched for a stable home in their new town. Upon receiving the compassionate assistance, Wood posted a Facebook status thanking Officer Natt that has gone viral since.

This story went viral on Facebook after the father posted a thank you message to Officer Natt. This is why I love most police officers… they are kind, courageous and hard working. You wouldn’t know that to listen to the awful propaganda out there, but it is true. A young, growing family found out just how giving Office Natt was. Some of the meanest comments I have ever seen followed the above video on YouTube – there are some deeply disturbed, hateful people out there looking for someone to blame for their own problems. That’s okay – these officers don’t care, they just keep doing their jobs and helping others. Millions of us appreciate them and admire them. Now, this little family also sees the police for the heroes they usually are.