Colorado Springs, Colorado: A crowd of about 25 have gathered here at the Whistling Pines Gun Club to show support for retired Major General Bentley Rayburn[1] and for a chance to win an AR-15. The General is challenging 4 time incumbent Representative Doug Lamborn and with Obama’s foreign policy blunders dominating the news, General Rayburn is uniquely qualified to discuss the issues that are dominating the news. 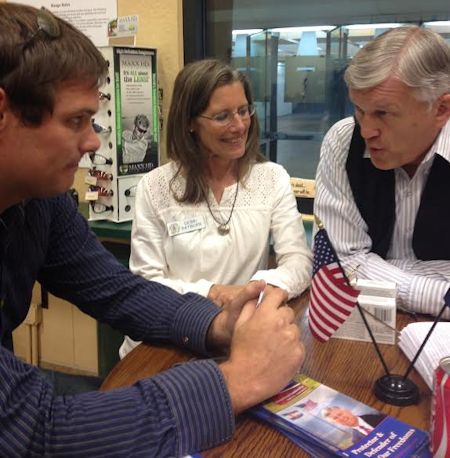 In an interview that covered foreign policy and politics General Rayburn offered a blunt assessment of President Obama and the administrations foreign policy but before we get ahead of ourselves, some biography on General Rayburn: Bentley comes from a family with a history of service to God & Country. His grandfather was a pastor, his father was the Founder of Covenant Seminary and a US Army chaplain. Uncle Jim Rayburn founded Young Life in 1941 and moved it Colorado Springs in 1946.

Bentley met Debbi who grew up in Colorado Springs, in their church youth group. After Debbi graduated from Wheaton College in 1977, they married and are now the proud parents of 4 children and 5 grandchildren.

After graduating from the U.S. Air Force Academy in 1975 and 31 years of service, Bentley & Debbi returned home to Colorado Springs in 2006

I start by telling General Rayburn that I plan to ask him about his race, the VA scandal, the prisoner swap, and foreign policy in general. As soon as I say “foreign policy” he quips, “What foreign policy? I’m not convinced this administration has a foreign policy.”

On the recent death and coverup of veteran deaths waiting for the Veterans Administration in Phoenix and elsewhere the General talks about the failure of centralized planning and inflexibility of any bureaucracy as large as the V.A.. I asked him specifically whether he thought that the resignation of General Shinseki had been handled appropriately and he was careful to point out that the problems had likely started before Shinseki had taken over but that the firing was an important precedent to set, “it had to happen because the next guy will understand the consequence if he doesn’t get it fixed.”

At multiple points in the interview one of the primary motivations for his congressional run is clear, General Rayburn is unhappy with the committees in the House that handle military and veteran issues. “If you watch these hearings they usually last for a long hour and a half and the few members that bother to show up make it clear that they aren’t engaged in the important issues that are being discussed.”

Next I asked him what he thought of the prisoner swap that has been drawing so much attention. “It sets a bad precedent but it’s hard to tell what the real intel is. The real danger is that we still have two years left with President Obama making decisions.”

The conversation naturally segued into a broader evaluation of current events and international policy. When it comes to the administration doesn’t mince his words,

“Teddy said it, speak softly and carry a big stick, but with this guy (Obama) it’s blather on and don’t carry any stick”

“Putin is probably sitting there in his Lazy Boy, shirtless, comfortable knowing that he is playing the American President.”

“Under President Obama our stature in the world has been so badly diminished that it’s putting every American in danger.”

“The only explanation for the blundering decisions of not just Obama, but Hillary and the State department, is that our safety is in the hands of clowns and amateurs.”

My primary concern in writing this is that I will find myself unable to properly communicate how encouraging it was to meet such an impressive candidate willing to call out President Obama for his reckless and dangerous policies. Without being disrespectful, General Rayburn offers a realistically harsh assessment of both the Administration and the danger posed by our enemies around the world. He carries the confidence of a general while remaining friendly and approachable. His wife is cheerful and engaging.

Of course like most of the patriots who are willing to speak openly and who demonstrate principle, General Rayburn hasn’t been gifted a million dollar campaign fund from someone looking to buy government favors. With the Colorado primary quickly approaching on June 24th the only path to victory is for the campaign to tap into the grassroots for energy, volunteers, and campaign cash.

“People don’t understand the danger being posed to them on a daily basis in foreign policy. It’s something we have to pay attention to everyday.” When I asked the General made it clear that he would almost demand a seat on the Armed Services Committee. I couldn’t help but ask him something about issues outside of the military and foreign policy. I asked him a question about banking policy specifically about restoring Glass-Steagall and his answer impressed me more than any other in the interview. “I’m not sure about that but I’d be willing to be educated by anyone willing to take the time to sit down and teach me.”

Confidence, humility, and service. He is exactly the kind of person we need to survive the last couple years of Obama. He is relying on the help of regular people and ultimately regular people like us will be the deciding factor.