Interviewing Ann Coulter On Her New Book, “Never Trust a Liberal Over Three–Especially a Republican”

Ann Coulter’s new book debuts tomorrow and it’s called Never Trust a Liberal Over Three-Especially a Republican[1]. The transcript of the interview, which was done by email, follows below. 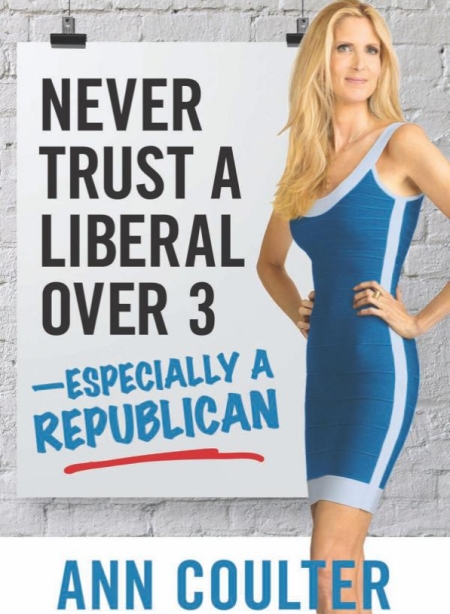 Do you think the failure of Barack Obama is going to damage liberalism the same way Jimmy Carter did?

LORD GOD ALMIGHTY, I SURE HOPE SO! The upside of this, of course, is that Jimmy Carter gets to throw away his “America’s Worst President” coffee mug.

I could ask the same question about the entire liberal agenda. But in answer to your question: Armed citizens are always a problem for the government. Democrats are for anything that strengthens government against the citizenry.

Why are liberal Christians so unwilling to stand up for their faith?

They do! It’s just that their faith is liberalism, not Christianity. “Liberal Christian” is an oxymoron, like “Patty Murray insight” or “Obamacare success story.”

Mitch McConnell & Lindsey Graham are facing serious primary challenges. Should conservatives be rallying behind their challengers?

Graham: yes; McConnell: no. Maybe I have a longer memory, but McConnell was the Ted Cruz on campaign finance reform. Practically alone among Republicans he was a stalwart defender of our First Amendments rights in opposing McCain’s campaign finance reform. He took courageous positions and courted a lot of bad press for opposing The New York Times’ favorite speech-restricting law.

McConnell’s the one MSNBC thinks they can take out. I can’t fathom why alleged conservatives are helping them.

He voted right on Marco Rubio’s idiotic scheme to import in 30 million more Democratic voters. Most importantly, he presided over the Senate Republicans when not one single one of them voted for Obamacare — not even “the girls from Maine” or “the girl from Arizona.” What other Republican leader has ever done that?

It’s a tough job being the leader of a group of Republicans disparate enough to include the aforementioned “girls.” But McConnell has done a better job and has been more conservative than any Senate Republican Leader in my lifetime.

Rand Paul is supposed to be the majorly-upgraded Tea Party senator from Kentucky, who beat the “establishment Republican” (supported by McConnell). But how has Paul voted differently from McConnell? How has he voted differently than the allegedly “establishment” Republican he beat? I like Paul, but he did spend two months hawking Rubio’s amnesty scheme before changing his mind. McConnell never supported it.

Graham is a different story. What has he been right on? Amnesty? Syria? Afghanistan? The NSA spying scandal? Sonia Sotomayor? Elena Kagan? Being a forceful and attractive representative of the Republican Party on television? No, no, no, no, no, no and no. Any Republican congressmen from South Carolina who challenged Graham would collect massive donations from around the country and finally rid us of this plague.

Marco Rubio campaigned as a Tea Party candidate when he ran for office, but he blatantly lied about being opposed to amnesty. Should conservatives hold a grudge about being betrayed?

It’s easy to understand why the Democrats are so hellbent on amnesty, since it will give them millions of new voters, but why is the Republican Party so supportive of amnesty when it’s obviously a huge political help to the Democrats?

Some Republicans seem to believe their own bad press and think Republicans are the party of the rich. That’s never been true! We’re the party of small businessmen, entrepreneurs, doctors, soldiers, middle class and upper middle class Americans. Democrats are the Party of Wall Street, Hollywood, Big Business, George Soros and Warren Buffett. Pro-amnesty Republicans are flushing their principles down the toilet to do the bidding of the Sheldon Adelsons and Mark Zuckerbergs. This will not end well.

Should we be bombing Syria or helping the rebels there?

No. For a quick reference on what we should be doing on foreign policy, it’s always the opposite of whatever the Democrats and Lindsey Graham want.

You may have been Mitt Romney’s biggest fan outside of his family. What do you think he should have done differently to win in 2012?

Liberals love to claim that Nixon embraced a Southern strategy design to get racist southern voters and because of that, all the racists started voting for the GOP back then. Explain why that’s bunk.

The true story of civil rights in this country is told in my book “Mugged: Racial Demagoguery from the Seventies to Obama.[3]” Every Republican should read it and be proud. (Though today, I’m hawking “Never Trust a Liberal Over 3[4] “!

Nixon did more for black Americans than any other American president. He pushed Eisenhower on the issue, working hard to pass the Civil Rights Act of 1957, for which Nixon was personally thanked by Dr Martin Luther King.

Between being vice president and his run for president in 1968, Nixon constantly ridiculed the Democrats for trying “to squeeze the last ounces of political juice out of the rotting fruit of racial injustice,” calling them “the “party of Maddox, Mahoney and Wallace” — all segregationists and, naturally, all Democrats. (Segregation was to the Democratic Party what abortion is today.)

One of the main reasons Nixon chose a rookie like Spiro Agnew as his vice presidential nominee was Agnew’s sterling civil rights record — including his defeat of segregationist George Mahoney for governor of Maryland in 1966 — the Mahoney in “Maddox, Mahoney and Wallace.”

As president, Nixon implemented the most massive desegregation of the public schools in the country’s history. Just within Nixon’s first two years, black students attending all-black schools in the South declined from nearly 70 percent to 18.4 percent. He also imposed formal racial quotas and timelines on the building trades, which had infuriatingly refused to hire black workers.

Both Nixon and Reagan lost or did the worst in the Southern states that Goldwater had won — by impressing segregationists with his idiotic purist libertarian vote against the 1964 Civil Rights Act. Republicans didn’t begin to win the South until the Dixiecrats died. (Note: It’s “Dixiecrats,” not “Dixiecans.”) Polls at the time showed that it was college kids in the South voting overwhelmingly for Reagan in 1980. Their elders were solidly for Carter.

Nixon didn’t have a “Southern strategy.” He had a “landslide strategy.”

You keep your dating life very private, which is very understandable, but I do have a question about it you may be able to answer. At almost every event I’ve been at where you’ve taken questions, I’ve heard men in the audience either ask you out or make jokey marriage proposals to you. So, have you ever gone out on a date with someone who asked you out from the audience?

Now that you mention it, no — but that’s a great idea!

Last but not least, how about dashing off a quick sentence or even just a word or two about the following individuals…

Mark Sanford: Where is that guy? Sure, he didn’t end up sacrificing a guaranteed Republican seat, but what good is he?
Miley Cyrus: Unfortunate.
Chris Christie: Dead to me. (He directed his temporary Senate appointee to vote for Rubio’s “Republican Suicide Act of 2013”)
Ted Cruz: 1) They really ARE smarter at Princeton than Cornell. 2) Republicans should run Cruz as the first White-Hispanic President and really tick off the press.
Paul Krugman: Screechy nut.
Wendy Davis: What is it with liberal women and tennis shoes? There are no attractive shoes that are comfortable?
Elizabeth Warren: Or as she is known by her Indian name: “Lies on Race Box”
George Zimmerman: I know if I wanted to murder someone, I’d wait until they had me on the ground and were pounding my face in before pulling my piece.

Once again, Ann Coulter’s new book is called, Never Trust a Liberal Over Three-Especially a Republican[1].