I’m a great admirer of the work done by James O’Keefe[1] and when I heard he had a new book out, Breakthrough: Our Guerilla War to Expose Fraud and Save Democracy,[2] I couldn’t wait to do an interview with him. 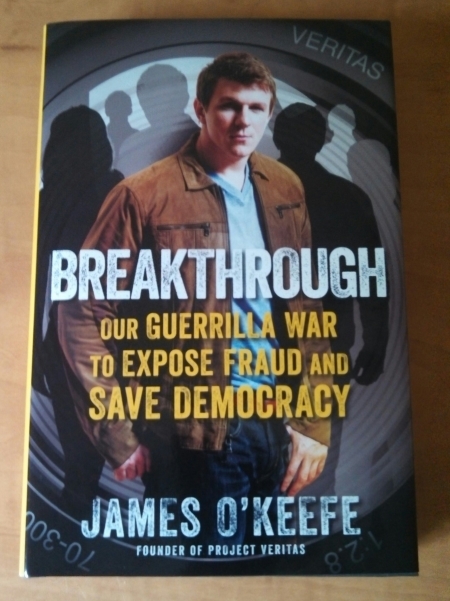 What follows is a slightly edited transcript of our conversation.

Now, I’ve met you in person several times and one of the things I find interesting is that given what you do, you’d expect someone who has a really loud, outgoing, flashy personality. Of course, you’re polite and friendly when people want to talk to you, but you also seem to be very quiet and give off the impression you’d probably be happy to walk in and out of a room without anyone recognizing you or knowing you were there. Given that, how did you end up getting in such a controversial, high profile field?

Well, I flip a switch and get into character in order to do types of investigations that I do and I think the same thing applies across the spectrum for all of my colleagues. It’s not natural for us to be merry pranksters or investigative people. We just have the willpower to get the job done and sort of force ourselves to do what is necessary to expose these people. It’s certainly not comfortable for us to do it. But I think that’s the – message in my new book Breakthrough[4] is that ordinary citizens have to take it upon themselves to get the job done. It’s not going to be comfortable. You’re not going to necessarily enjoy the feeling, but it’s what’s required of you.

In college, you were a bit of a rabble rouser. Paul Robeson was treated like a hero at your school even though he was a diehard commie who supported Stalin. You put out an alternative paper with his face on it that said “Glory to Stalin” after the school paper had talked him up. Students burned your paper, stuffed them in garbage cans — and then they bring you in to warn you to be more respectful to people. Do you think that’s just a very typical experience at colleges? What do you think about that?

This was my first lesson in soft tyranny. I sat next to one of the deans at Rutgers and she looked me right in the eye and leaned over and said, “James, this paper needs to be more respectful. A respectable journalist doesn’t muckety, muckety things up.”

And I was taken aback by that.

I think it’s exactly what a respectable journalist ought to be doing. He should be making powerful officials feel the pressure. That’s how we clean up society. That’s democracy in action. And the fact that Paul Robeson, who was a Stalinist, had buildings named after him at Rutgers — and Milton Friedman, who’s also a graduate — doesn’t — seems to be very unfair. Even if you love Paul Robeson and love Stalin, you have to admit that a man who won the Nobel Peace Prize in Economics deserved to be honored as well. So it was the injustice, imbalance and lack of intellectual diversity that really motivated me to get involved initially.

Now let me ask you about this one. This is kind of a tougher question. There was an employee of ACORN and you guys ended up paying her, I think $100,000. Can you tell us about that?

Oh, I sure can. I’m happy to clarify.

The employee at ACORN, Juan Carlos Vera, admitted he made the statements that he made you saw on video tape. He was counseling us on how to get underage prostitutes across the Tijuana border. The specific legal issue in that case was concerning whether or not he had expectation of privacy when I was taping him because California has a two-party consent statute. Now, I didn’t admit any liability. I just settled because it would have cost me a million dollars to go to Federal Court and fight it. I filed a motion in Federal Court saying the statute was unconstitutional in so far as it pertains to these types of situations. Now what you hear a lot of is, well, he was just playing along. Okay, well, I don’t think so, not based on what he was saying to us — and he told ABC News, local ABC News 10 in San Diego after he was fired that he was trying to help Hannah Giles and myself get a better life. So he admits trying to help us do what we were doing.

They just sued me because I taped him.

David Corn of Mother Jones Magazine won a Polk Journalism Prize for printing, publishing a tape of Mitt Romney in the 47% video. Now Corn was concerned about the same statute. So there seems to be the politicizing of the First Amendment. My adversaries condemn my taping of an ACORN employee, but they absolutely love and embrace the taping of Mitt Romney and the 47% video. In both cases, the issue of the two-party consent statute arises.

Now the other thing you hear about the ACORN videos which I lay out in Breakthrough is that they were cleared of criminal wrongdoing; therefore, the whole tapes must be fake and a hoax and edited out of context. Well, no, the ACORN employees were cleared of criminal wrongdoing because it’s not technically illegal to offer someone advice. In fact, in Jerry Brown’s report there’s a little asterisk on page 16 of the report and it says that nothing I could have said, nothing that the pimp and prostitute could have said, would deem the ACORN employee’s behavior criminal because we were acting. We were not actually in real life a pimp and prostitute. This is a fact often omitted from legal analysis of what happened. So this is another example of how the media and the government team up together to malign the reputations of those who seek to expose fraud.

Do you think there is a double standard for journalism in this country? David Gregory broke the law on TV — he brings out an illegal clip on TV; he gets a pass. A guy listens in on Mitch McConnell; the Obama Administration cuts him a break. You should have never had any criminal charges for what went on in Mary Landrieu’s office; yet they tried to bury you. Do you think there’s a double standard that conservatives have to face criminal charges that liberal journalists never have to worry about in the first place?

Well, it’s not even a double standard anymore. It’s politicizing of the First Amendment. It’s not a Left or Right issue. The Department of Justice gave journalist status to this Curt – I can’t remember his name. Curtis, it’s Curtis Morrison in Kentucky who admitted to eavesdropping through a wall of Mitch McConnell. Now, I defended this guy in the Daily Beast. I argued that the punishment is not commiserate with the crime. It is a felony, but the Department of Justice gave him the status of journalist. Now you have David Gregory on Meet the Press suggesting Glenn Greenwald….that he’s aiding and abetting Snowden by reporting on what Snowden did.

What you have here is the criminalization of journalism depending on when the establishment wants the expose criminalized. Now in Mary Landrieu’s office, I walked into a Federal building using a pretense. But, I showed my driver’s license at the entrance of the door. So there wasn’t even really a pretense. And so I definitely faced severe criminal prosecution for years and my tape of what I did was destroyed. The government deleted the contents of my recording. This is a huge double standard. They lie about me and there’s no video tape to support it. Sometimes there’s even court transcripts to contradict it, but people believe what they want to believe and the Justice Department goes along with it. It’s very troubling.

In Breakthrough,[5] I really document a lot of instances where that is not the case. Conservatives are not very good at breaking news. They respond to existing news. They react to the news. In fact, I would venture to say that if it was a slow news day, conservatives would sit with their hands under their butts and say there’s nothing to talk about. I don’t view what I do as conservative. I view it as truth — as reality seeking, but, we break news at Project Veritas[6].

And there isn’t enough support and, John, I think the reason why is because people in the conservative movement don’t like controversy. They don’t like blood in the water. They don’t like hot water. They don’t like muck — they feel uncomfortable. You know, PJ Media’s Bill Whittle said it perfectly. He said, “Conservatives are so beaten down in the pop culture that they are utterly unwilling to stand up for what they actually believe in.” And when an effective actor comes along and makes change, they throw everything at you. They play dirtier than you can imagine. When Nadia Naffe charged me with date rape, the court transcripts showed that she was contradicting herself. I sued David Shuster and Olbermann for defamation, got money and used that money to fund my voter fraud videos. Most common sense people think it’s absurd, but you have a few people who say, “Oh, James must be in trouble.” It’s unfortunate that people don’t read between the lines more. This is the establishment throwing everything at somebody trying to stop them and their efforts to expose the truth.

Thank you. I really appreciate your support.

Once again, James O’Keefe’s new book is called, Breakthrough: Our Guerilla War to Expose Fraud and Save Democracy,[2]