I was excited to get an opportunity to interview Jason Mattera about his extremely well researched book, “Crapitalism: Liberals Who Make Millions Swiping Your Tax Dollars.[1]” What follows is a slightly edited transcript of our conversation. 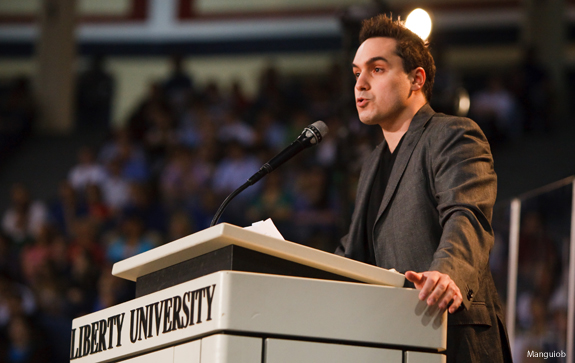 I thought Solyndra’s George Kaiser was a particularly interesting chapter in the book because he’s one of these liberals who claims the tax system isn’t progressive enough and we all need to pay more taxes; yet he has manipulated it to the max.  At one point you said he was moving up the national list of billionaires while he said his taxable income was $11,699. Tell us a little bit about that.

Yes, you’re absolutely right.  Here is someone in George Kaiser who’s a complete phony and a hypocrite, says the tax system isn’t progressive enough, and he employs a multitude of schemes, all legal, to insure that his tax burden is as low as possible.  So here’s a man who, while he was rising up the billionaire ladder on Forbes’ list, was on record only making himself less than minimum wage.

How does that happen?  Well, he does the sort of schemes similar to what he employed with Solyndra.  Solyndra, as we know, went bust.  The taxpayers were forking over hundreds of millions of dollars, but George Kaiser, because of his political access, was able to rewrite the investment contracts and restructure it in order that he would get paid out first.  And with him getting paid out first, he was able to take whatever losses he incurred from investing in Solyndra and carry it over to future income.

That’s how people like George Kaiser, who whine about how the taxation system isn’t progressive enough, bill taxpayers on the frontend for these green energy boondoggles like Solyndra and then if it doesn’t work out, they’re able to have massive tax write offs on the backend for many future profitable enterprises.

But George Kaiser’s main charity, actually as a public charity, and you know I really encourage people to go and read in CRAPITALISM how that also helps his, his bottom line in his enterprise.  He’s able to rake in a lot of money, pay very little taxes because of these schemes that most people don’t really know and don’t understand, but which we detail very heavily in CRAPITALISM.

Now, you went into great detail about a significant number of politicians.  You talked about a lot of them that are using their positions to get rich.  Talk about some of the sleazy ways these politicians are making money at our expense.

Yes, many of the politicians we profile love to talk about how they’re looking out for the little guy and for the middle class, and it’s the exact opposite.  They trample on the little guy every chance they get, and rather than look out for the middle class, they’re engaged in these redistribution of wealth schemes that help themselves fatten their own wallets — and the rest of us are holding the bill.

So, how does someone like Representative Greg Meeks live like a fat cat?  He’s a congressman out of New York; he actually on his financial disclosure forms paints himself as this broke gentleman.  And there is very little money in his bank account; so how do you, how do you make up for that?  Well, you drive a taxpayer-funded Lexus for $1,000 a month.  That is correct — $1,000 a month, we’re paying this dude to drive around in a Lexus.

He uses his status as a congressman to gobble up Super Bowl tickets every year; he purchases tens of thousands of them.  He calls it a campaign, you know, a fund raising event.  I call it partying at the Super Bowl.  He actually got a campaign donor to offload a home, sell him a home that was $400,000 below market rate; again, nothing shady about that.  But here’s one instance of Greg Meeks, a congressman people may have never heard of, but here’s a guy using his perch in Congress to live like a fat cat while the rest of us suffer from the miserable oppressive laws that he enacts.

And there are others we talk about — Harry Reid, Maxine Waters — individuals who again love to champion the middle class, talk about how they’re champions for the middle class. They love to talk about how the Koch brothers are undermining democracy and rigging the game in their favor and yet the very exact criticism that was said about the Koch brothers could easily be a summary of Harry Reid’s career and could easily be a summary of Maxine Waters’ career.

I thought Chuck Swoboda, someone that 99 percent of the people reading this interview probably have never heard of, is a great example of how businesses are using their government ties to make tons of money at the expense of consumers in the free market.  If you’re a conservative and you’ve read Atlas Shrugged, he reminded me of one of the bad businessmen from that who were tied into the government and making tons of money while the free marketers were getting the shaft.  Tell people about Chuck Swoboda.

Yes, and you touched on something that should be in the forefront of every conservative or libertarian’s mind and that is business does not automatically mean free markets.  Big business will gladly partner with government if the government is willing to give them the mandated base of customers or crush the competition.  Chuck Swoboda is a great example.  He is the CEO of the LED lighting company called Cree.

Now they have a mandated batch of new customers that while we’re in Home Depot we can only buy these expensive LED bulbs that will go for 10 or 20 bucks and not only did they hold the lobby for that legislation that banned the incandescent bulb, but they also have raked in hundreds of millions of dollars in government subsidies over the last 10 years to develop the technology for LED bulbs.

So, you know taxpayers are getting barreled over on both things.  Not only can’t we buy light bulbs of our own choosing, and that’s a choice, right?  Hey, if I want a more expensive LED because I think it’s going to save me money in the long run, fine, I should have that choice.  If I don’t want the more expensive LED bulb and I like buying incandescent bulbs for 40 cents a pop, then, hey, I should have that choice.

But politicians made the decision for us and Chuck Swoboda was in the backend of that pushing politicians in that direction while we’re subsidizing the business plan of Chuck Swoboda and insuring that he gets hundreds of millions of dollars of our money to produce this supposed energy efficient technology.  Oh, by the way, I should mention this, too, that most of Chuck Swoboda’s workforce at Cree is over in China — yes, that clean energy haven.

Here’s a quote from the book I want you to expand on, and this is quoting you, “Here’s a quick rule of thumb for CRAPITALISM detection, anytime you see a large, new government program assume big businesses are making out like bandits with your tax dollars.” Expand on that?

Well, let’s look at the biggest government program that we’ve seen over the last four decades, and that is Obamacare.  Obamacare was a huge crony giveaway to the drug and insurance companies, again because now they have a mandated batch of new customers.

And one of the individuals who was not only a big bundler for Barack Obama, but was also the chief lobbyist for Pfizer – Pfizer, the largest drug company here in America — this lobbyist, her name is Sally Susman, bundled half a million dollars for Barack Obama, she was helping push for Obamacare’s passage.

Now Pfizer just didn’t mention that they were struggling financially because the patents on their drugs like Lipitor were about to expire.  That means that there were more generic versions and they were going to lose huge amounts of money.  Financial analysts on Wall Street actually were surmising of Pfizer’s decay because of the expiring patents.  But yet Pfizer helped literally, literally write Obamacare and write the mandate that we must all buy an insurance plan that makes available every single FDA-named, pretty much name brand drugs.

So the whole, you know war on women narrative about women’s rights, you know, free contraception; it didn’t have anything to do with women’s rights.  It was all about Pfizer and other drug companies that now had all these new customers at their disposal because employers, or people who were self-employed, had to buy plans that they didn’t want, that they didn’t need –but it helps in Pfizer’s wallet.  And Sally Susman recently cashed in on $4 million worth of Pfizer stock.  So her prospects are looking up, but the rest of us are stuck with the check.

Well, now let me ask you one more question.  The chief spokesman for the global warming movement in America is Al Gore.  He doesn’t make any money off of that, does he?

No, of course not, no, no.  But, but then again if we want to look at Al Gore and then let’s see 14 companies he invested in — clean energy companies – well, I guess we can say it’s just one big coincidence that 14 of his companies received $2.5 billion in subsidies from the Obama Administration over the last six years.  Oh, and also big coincidence that Al Gore is now worth $200 million.

He left office worth $2 million.  Al Gore’s partner, by the way, John Doerr, who I also profile in CRAPITALISM lives by similar schemes.  Sixteen of his companies also received lucrative subsidies from the Obama Administration to combat this supposed global warming that is upon us and is going to wipe out civilization.

You know what, it’s one thing to think we’re on the precipice of a global warming, Armageddon; it’s entirely another thing when you say that and you scream the loudest and your only policy prescription just happens to line your pockets with taxpayer cash.  I’m sorry; I am less likely to believe your prognostication on the future of the primate in terms of warming if you’re telling me that the way we avoid such a crisis is for the government to invest in the companies that oh, yes, you’re coincidentally investing in.

Yes, it’s a heck of a coincidence, isn’t it?  All right, Jason, I really appreciate your time.  Thanks a lot.