Last week, I caught up with Mark Levin[1] and we discussed his new book, The Liberty Amendments: Restoring the American Republic[2]. Here’s a slightly edited transcript of our conversation. 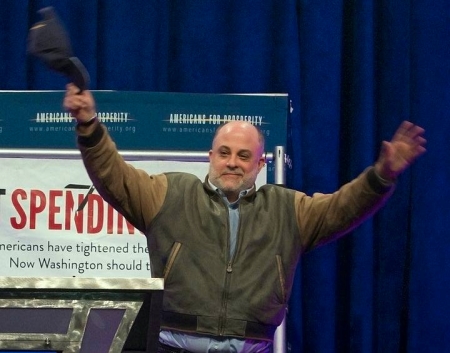 Now your book is about putting together an Article 5 Convention, but for a lot of people, even ones that agree with your ideas, it almost seems like a Hail Mary. Are things so bad in your opinion that we need to do this and what happens if we don’t in the next 10 to 20 years?

Number one, the design of the federal government today and the way it operates is not the design that exists in the Constitution. Number two, the Supreme Court — every time it issues opinions seems to think that it is an ongoing Constitutional convention and rewrites the Constitution almost willy nilly as it did with Obamacare and DOMA and has done so many times over the last several decades.

Congress behaves in a way that is also not authorized in the Constitution. It has specific enumerated authorities. It does not get to sit there as a legislature for general purposes passing laws whenever it wants about whatever it wants. And, of course, the President of the United States’ constant refrain about acting if Congress doesn’t act and his imperial mindset also is without any Constitutional support.

Then finally we have this massive bureaucracy with 4 million individuals which institutes give or take depending on the year 3,000 laws each year. Many have criminal penalties; many are strict liability laws and so here we have Congress conferring lawmaking power to a non-elected authority for which there’s no real control.

So, if you accept my premise that this is a post-Constitutional period, then the question is what do we do about it? What I’ve done about it is gone back to the Constitution. What do the framers say about it? Well, the framers did say something about it and they said, look, we’re going to throw you a lifeline. We’re going to make sure there is recourse short of violence. Their phrase, not mine, if Congress or the federal government should become oppressive, George Mason’s phrase, not mine, and they said here it is under Article 5. So, it’s not a Constitutional Convention. That appears to be what goes on in Congress and the White House and the bureaucracy in the courts every single day. This is a lawful legitimate Constitutional process that I’m talking about.

There was a shocking statistic in your book, one that I hadn’t heard, one that most Americans haven’t heard that could have a huge impact in our financial future. Let me read the quote from the book, “In addition the Fed has stated that it will devalue the dollar by 33 percent over the next 20 years which will cut the dollar’s value by 1/3 while reducing the value of savings investments.” I’m sure a lot of people are saying oh, my gosh that sounds pretty big. What does that mean for me? What does that mean to the average American if that happens?

It’s not a state secret. The Fed has announced it, but nobody’s paying attention to it. What that means is that the value of the dollar in 20 years will be at least 1/3 less and even worse really because of the build-in inflation through this endless quantitative easing. But as a matter of policy, it is their goal to reduce the value of the dollar by 1/3 and that way, in their view, they reduce the debt by 1/3. So, the monies that they owe individuals, or entitities, or governments and so forth — 1/3 of it’s wiped away by their own policy.

This is the conduct of a country that’s in great despair. This is the conduct of a country that is well aware that what it’s doing is unsustainable. The problem is this is all going to fall on somebody’s head at some point, either our children or our grandchildren, and there are some of us who are trying to ring the alarm bells and trying to offer a way out. It’s not easy, it’s a very difficult way, but nonetheless it’s a legitimate and Constitutional way.

Now, a little side question here that’s come up a lot with you lately. Reince Priebus thought of the idea of having a radio host like you as a moderator and I don’t know how serious he was about it when he said it, but wouldn’t it be a good idea especially if we’re going to cut down the number of debates? What’s wrong with changing things up and having somebody like you come out there and run a debate? You and maybe some other hosts? Wouldn’t a lot of people tune in to see, let’s say, you and Hannity and maybe Ingraham or someone out there asking the candidates questions?

Well, Reince Priebus is not serious about this. This is a ruse and to demonstrate it, I had my radio producer contact his office and say, “I accept,” and of course they never got back to us. I don’t really care if I’m a moderator or somebody else is a moderator as long as it’s an individual who’s not pushing the Left Wing media agenda and is serious about discerning the mindset, the substance, the policy positions and the backgrounds of candidates who want to be President in the Republican Party.

Picking people from CNN and NBC and so forth to be moderators is really self-defeating and destructive for conservatives and Republicans. So there are other ways to do this. Of course, if I were a moderator, I think I’d do a pretty good damn good job of it — but that said, I’m certainly not lobbying for it and I don’t take Priebus as being serious.

Now, a related question to that: A lot of conservatives, myself included, have complained bitterly about the leaders the Republican Party chooses and the fact they don’t listen to us. They don’t respect the people that put them in office. Now someone like you, I’m sure, gets a level of access to these guys that most of us don’t get. So, I want, I mean let me ask you that big question a lot of people wonder. Why are we forced to spend so much time fighting our own people in Congress instead of the Democrats? If you cut all the way down to the bone, what’s the rot at the heart of the Republican Party in D.C.?

I address this almost every night on my program. I am extremely fed up with the Republican establishment, these so-called Republican leaders, the consultants, you name it. I think they are dug in; they believe in big government. I call them neo-statists. They may not be as extreme as the Democrats, but nonetheless they like big government. You can see it as recently as today in the pages of the Wall Street Journal where Karl Rove is out there writing about how the effort to defund Obamacare is destructive to the Republican Party because it turns off the Independents.

I mean these are not people who accept the principles of the Founding Fathers. These are not people who want to fight for these principles. They do not see our circumstances as dire and that’s why when they actually hold power and have held power in the past, they balloon the bureaucracy and the debt in ways that are destructive, too. I mean, let’s be honest; the most profligate administration prior to this one was the Bush administration. ….and he had six years of control of the House and the Senate. And what did they do? They expanded federal control of our education. They expanded Medicare. Is there anything they shrunk? I don’t think so. We got some temporary tax cuts. That’s great, but that’s just not good enough. So, I feel the current Republican leadership is feckless, is weak, and it’s one of the reasons why I think we lost the last presidential election because they apparently have a lot of the influence over who’s nominated, too.

Now here’s the $24,000 question: it’s what I was thinking of when I was reading your book, which I think your book is great. I agree with all the ideas in it. I agree with everything you want to do in it, but I was also thinking this, I was thinking, wow, this is pretty intellectual. The people who understand what you’re talking about and agree with it for the most part are probably fairly well educated conservatives and liberals that, I mean Libertarians, the sort of people who know who the Founding Fathers are. They know what the 17th Amendment is, but that’s probably not a description of most Americans.

So realistically, how do we sell this idea and other great, and even other great conservative ideas like it to the sort of people who typically aren’t going to listen to you on the radio, aren’t going to read my website? How do we get that out to the great mass of Americans and turn them on and say, yes, this is something we really need to do. How do we reach them that way?

Well, let me answer it this way. How many Communists do you think actually have read Karl Marx’s books? Many of which were very complicated? How many capitalists do you believe have actually read some of the great works of Milton Friedman and even before that, Adam Smith? The point is you want to make the case as best you can from both a philosophical and practical point of view for a position. Ideas have consequences and if there are several hundred thousand people in my case that read the book and then they express in their own words to their family, friends, neighbors and co-workers, what it means is that they don’t even know where these ideas come from, but they like the ideas and they’re promoting the ideas.

That is how you promote a movement or promote policies that might be embraced by the broader body politics. You can’t write comic books and just start distributing all over the world and hope that people take a look at them because that’s not going to fly. You’ve got to make a serious substantive and, yes, an intellectual case for your position. It has to withstand scrutiny. So, it’s not so much a question about will everybody read my book, everybody listen to my radio show, and that sort of thing. It is a matter of igniting an idea or reminding people of an idea that our framers came up with, promoting it, and hoping that other people will do the same in their own way.

Mark, I really appreciate it.