Last week, I got together with Newt Gingrich at the South Carolina Energy & Opportunity Forum which was sponsored by the Southeast Energy Alliance[1] and the Myrtle Beach Area Chamber of Commerce[2] (A special thanks goes out to Gerri McDaniel[3] and Adam Waldeck for helping to set the whole thing up). I was glad to get an opportunity to talk with Newt because I believe he’s one of the best idea men in the Republican Party and there were some questions I wanted to ask him about his run at the Presidency in 2012. What follows is a slightly edited transcript of our conversation. 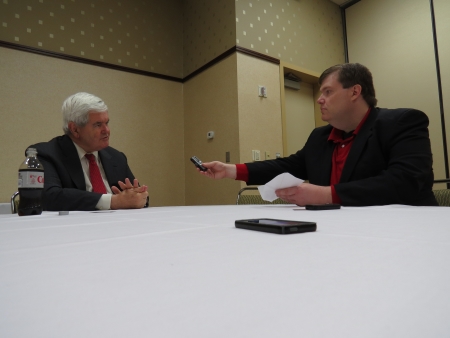 When you were running for president neither you or Rick Santorum could get traction. I know you said there was a possibility of a unity ticket. I think that’s probably what it would’ve taken for one or the other of you guys to pass Romney after you started splitting the vote. Can you tell us a little bit more about that?

I don’t think there was that much talk of a unity ticket. We tried to talk about whether we could separate the states and have him go in one set and me go to another set. But, it didn’t turn out to be very practical. But you’re right; once we began splitting the conservative vote, it became much harder.

The main pitch for Romney that his supporters made for him was that he was the most electable candidate. Well, he didn’t turn out to be all that electable since he lost. So let me ask you something, do you think any of the candidates, yourself included, could’ve beaten Obama and if so, which ones?

Well, I don’t think we know. I had a very different position on immigration than they did in that I was, I made the statement that we’re not going to deport grandmothers. That was seen very widely in the Latino and Asian American communities as a sign that I wasn’t hostile. Univision shared with me their data and it said that when Romney said, “Well, of course the grandmothers would self-deport,” that he lost 50 points in a week and never recovered. On the other hand, you were up against a machine that was very good and very well financed and I think was technologically a generation ahead of the Republicans. So, I’m not going to claim one of us could’ve won.

Now speaking of that issue, one thing you hear all the time from Republicans since the election is we need to do more minority outreach. We need to reach out to Hispanic Americans, black Americans — but it’s all talk. We see some very small attempts at minority outreach from the Republican Party, but we’re not seeing any big efforts. Why are we having so much trouble doing something that seems to be so basic?

Well, I’m not sure I agree with you.

First of all, you have Marco Rubio leading an effort on a new immigration reform bill. Whether you like it or don’t like it, it is a serious effort and he’s getting a great deal of attention including in the Latino and Asian American communities. We just nominated a Hispanic candidate who was a Navy SEAL to the U.S. Senate in Massachusetts. And so you’re going to have two months now of the Hispanic Republican candidate running for the U.S. Senate who’s a very attractive, very articulate guy.

And I think you’re going to see the Republican National Committee work very hard to communicate in the Latino community that he is a Republican nominee. I know that Reince Priebus, the Chairman of the Republican National Committee, has been having a whole series of meetings in not just the Latino community but across all of America with people of every background trying to begin the process. It’s not that we want to become a party that specifically reaches out to any one group, we want to become a party which is potentially open to every American. So every American could say, “Gee, I wonder if my life would be better with the Republicans?”

So, with that being said, do you think what we’re doing is sufficient or should we be doing more? And if we were doing more, what would you have liked to see us doing?

Oh, I think this is just a beginning. We have a long way to go and I think that there are many things we can be doing over the next year. I hope we’re going to have a whole series of town hall meetings that are in various minority communities. I also hope that we’re going to be emphasizing our ability to reach out to people. My sense from what I see happening at the Republican National Committee is that there is going to be a real serious effort to reach out across the board and to have our campaigns in every neighborhood and not give up on anyone.

One thing I noted when I supported you as you ran for President was that you actually won conservative victories in Congress. We don’t see a whole lot of that anymore. We seem like we’re always on defense so a victory for us is stopping the Democrats from moving the country further to the left. We actually had more conservative victories during the Reagan years and when you were in there. Why do you think we’re now stuck on the defensive instead of moving the country more to the right?

I think we don’t have imaginative leadership that looks at how to take strategic advantage and how to pick fights that the other side will lose. We had one recent very encouraging example and that was the air traffic control fight. It was impossible for Obama to defend this position. He collapsed totally and it was clearly a modest, but real victory and they did it without spending more money, without raising taxes, by insisting that the Department of Transportation find less valuable things to quit spending money on. If they could learn to maneuver and to pick the fights on grounds where the American people will be with them, we could win a lot of conservative victories in the next few years.

Now one thing you caught a lot of flack for during your campaign — and I actually liked it — was the moon base comment. My thought process was that we had a man on the moon in 1969. It’s 2013, so shouldn’t we be talking about moving to the next level? If we want to have space based weapons, we’re going to probably need a moon base. Also what do you think it says about the country that we’re more than 40 years out from when we had a man on the moon and people are treating it like it’s crazy to talk about having a moon base at this point in time? 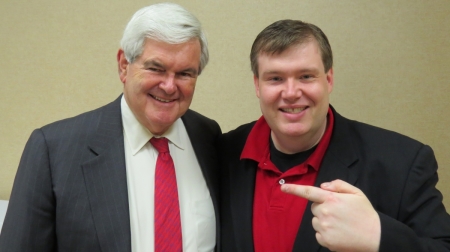 Well, I think it’s a very sad commentary on our elites in particular and on the cynicism of some of our politicians. The person who captured it was Greta Van Susteren, who came on the campaign bus and interviewed me. She said she couldn’t help but look at the difference between the reaction of John F. Kennedy in 1961 and the reaction to what I said. When Kennedy said it in ’61, we had no way of knowing we could do it, yet we did it in 8 years. We now know we can do it and we are so timid, so bureaucratic and so lacking in leadership in both parties, that they make it seem stupid.

I was just up at Penn State and they have a project called Lunar Lion… They think they can put a small vehicle on the moon within the next couple of years for 10 percent of what NASA thinks it would cost. I’ve been working with a group called Silver Spike based on the transcontinental railroad. They think they can actually put people on the moon for about 10 percent of what NASA thinks it would cost. So I look around, I see a whole new generation of private sector space emerging and that’s the framework within which I was talking with a lunar base. By the way the Russians have announced they want to build a lunar base by 2030. The Chinese have a program to put a man on the moon. It struck me that it was the American defeatists who were ridiculing my idea, not people who believe in American exceptionalism.

Last question. I know there are a lot of people who are getting excited about the idea of Crossfire coming back with Newt Gingrich there. I hadn’t heard of anybody pining for Crossfire, but Crossfire with Newt Gingrich seems to get people excited, so can you tell us about that? Are we going to see that?

Well, I don’t know yet. We’re talking with CNN and they have some very interesting ideas. The original Crossfire was very interesting. I used to go on when I was a very junior Congressman. Later on, it sort of degenerated into yelling at each other. I have no interest in that. But I’d like to take the idea that when facts matter, you ought to tune into our show. And I’d actually like to work it so that people might be able to tell us say by 7:00 in the morning what they wish that day’s show was. I’d also like to work it so that while we’re talking, we’d actually have fact checking by the viewers. If you notice, when Tiger Woods had a penalty called the other day, it was actually discovered by somebody sitting at home watching TV. … Now I don’t know if it would work out or not, but we’re certainly excited and interested even though we’re still in the negotiating phase. You never can tell.

Newt, I really appreciate your time. Thank you.