It has been great to see my friend Pamela Geller from Atlas Shrugs[1] starting to gain more national prominence. She’s a got a new book out, The Post-American Presidency: The Obama Administration’s War on America[2], she’s been the point person on the Ground Zero Mosque right from the get-go, and she’s even made enough of a splash to merit a New York Times[3] hit piece. 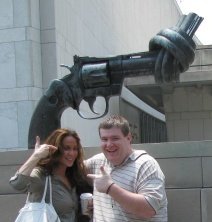 I’ve known Pamela for a long while. Back in 2008, we had lunch together in New York[4] (along with my pal Karol[5]) and we paid a little visit to the UN’s Knotted Gun Disarmament Sculpture.

If you’re wondering what Pamela is like in private, she’s exactly like she is in public. She’s extremely passionate about what she believes, she’s genuinely concerned about the world her daughters are going to grow up in, and she’s perfectly willing to be vilified, smeared, and demonized to prevent the spread of radical Islam in the United States. Pamela isn’t perfect (no one is), but I can tell you that she’s a decent person, her heart is in the right place, and she knows what she’s talking about. This would be a better country if a lot more people were paying attention to what she’s saying.

What follows is the slightly edited transcript of the conversation that I had with Pamela earlier this week. Enjoy!

Pamela, question number one. I give the credit to you more than to any other person for helping to focus attention on the Ground Zero mosque story. Now we hear the case for the mosque incessantly in the news. Give us the short version, in 30 to 60 seconds, for why you think people should oppose the mosque.

I think people should oppose the mosque because it is grossly insensitive, deeply offensive and deliberately provocative. To build a 15 story mega mosque in a building that was destroyed in the attacks by a piece of the plane — the landing gear that crashed through the building….

We know that it is an Islamic pattern to build triumphal mosques on the cherished sites of conquered lands. And even though the Japanese could build a Shinto shrine at Pearl Harbor, they never asked because it would be a deeply offensive and insensitive thing to do.

We’re constantly being counseled about this hypersensitivity in the Muslim world. People are killed, slaughtered, embassies are burned — but, don’t run the Danish cartoons. Don’t run that little “Where’s Muhammad?” cartoon. This is just this past week. Do not show disdain for Islam. Do not insult Islam. But here you have 70 percent of the American people asking, pleading to the humanity of Rauf and Daisy Kahn and it is callously dismissed, which I find radically intolerant.

Let’s say a Muslim came up to you and said, “Pamela I’m against terrorism. I don’t want Sharia in this country. I don’t want to see Israel destroyed. I consider myself to be a moderate. But, I keep hearing people in the news claim you hate people like me. So I want to hear it straight from you. Is that true?” What would you tell that person?

“I love people like you and I hope that you and I will fight together this oppression, this gender apartheid,” and if this moderate knows anything about me, he or she knows that I fight for the moderates. I fight for people that are leaving Islam. I’ve created a gateway, a network of information, safe houses, and other people, other resources for Muslims in trouble[6] to go to because it is so hush-hush. I do not hate people. It’s why I do what I do.

Every time I read a story about you these days, I seem to see a quote from Charles Johnson[7] in it. I know a lot of people are still scratching their heads wondering what happened to him. Here’s a guy that used to run one of the best loved, most read blogs on the planet. Then he started attacking you, started attacking other conservatives, moved way over to the left and the traffic on his blog imploded. Talk a little bit about that and what happened to Charles Johnson.

I’m not equipped. Psychiatry is out of my field.

It’s one thing to evolve in your thinking. It’s another thing to become the reviled enemy of that which defines you. His sole purpose is to destroy people. I can’t relate to it. I don’t understand it. We can all sit here and scratch our heads and say, “Is he an operative? Is he being paid or what happened?” Who cares? He’s a destructive force.

Of course, the left will quote him even though I have absolutely nothing to do with him. I (don’t) read his site. I don’t know what he’s talking about. The enemy is, the last time I looked, it was creationism. I don’t see people being burned alive and slaughtered over Adam and Eve. So to me, there’s really nothing to talk about with him.

He adds nothing to the dialogue. He adds nothing to the discourse. He seeks solely to destroy the most effective voices on the Right. So to me, he’s lower than even a Kos and I don’t think the left trusts him either because he’s such a traitor. To say that he’s abandoned his principles is actually giving him too much credit. He now reviles the thing that he once was. You explain it.

I’m not a big fan of Wikipedia[8], but they had a great quote from you I wanted to ask you about. I’m quoting now from you,

It galls me that the Jews I fight for are self-destructive, suicidal even. Here in America (and the world over), Israel’s real friends are in the Republican Party and yet over 80% of American Jews are Democrats. I don’t get it. The conventional wisdom on the Left is that Israel is an oppressor and her actions are worse than the world’s most depraved and dangerous regimes. Chomsky, Finkelstein, Soros—these men are the killers.

Well, let’s talk about Wikipedia. First of all, it is run by a leftist/Islamic group of editors. You cannot edit my page. It does not speak to my work. I just wanted that noted for the record. People have written to me and said, “I’ve tried to change a page and add things and it disappears within seconds.” What is it, monitored 24/7? That’s really pathetic.

To my quote, absolutely. What we have in the liberal Jewish mind is not a religion. A religion has nothing to do with it. It’s purely political. They worship at the church of human secularism. Their dogma is leftist, their dogma is liberal, and frankly they are part of the problem.

My coalition are freedom loving peoples — Hindus, Sikhs, Zoroastrians — anyone that fights the individual rights and basic unalienable freedoms. So, yes, I think that the Chomskys and the Finkelsteins are worse than our middle of the road enemies because they wear the mask of, “I am Jewish.” They are the enemies of their own people and they deserve to be relegated to the very fringes of society. But they’re not because the Left and the Islamic supremacists use them as fronts.

Last question: Your new book is called The Post-American Presidency: The Obama Administration’s War on America[2]. The product description of the book includes this line.

“He envisions himself as more than just a president of the United States, but as a shaper of the new world order and internationalist energetically laying the groundwork for global government, the president of the world.”

Is Barack Obama a man who wants what’s best for America or do you believe he’s looking to deliberately weaken this country for his own reasons?

The reason why this is so critical to his basic thinking is because you have to understand that America’s founding principle, everything noble and great and magnificent that she achieved, was based on individual rights and that’s what American exceptionalism is, individual exceptionalism.

He would like to see us as just one of many socialist nations. It’s deeply troubling but it’s reflected in all of his policies, both domestic and international.

Thank you so much.