Why would Obama listen to any military leader?[1] He doesn’t even listen to those he hand-picked to do his bidding. He has nothing but disdain for our military and despises them in the extreme. He has never taken our leaders’ advice and I wouldn’t expect him to do so on Iran. He doesn’t care how the deal hurts America or puts the world in danger, he cares about appeasing the Mullahs, plain and simple. Dempsey is exiting stage Left and I bet it can’t be soon enough for him. This presidency will go down as the most disastrous foreign policy experiment ever for the United States. And the results of this monstrous capitulation are to die for. 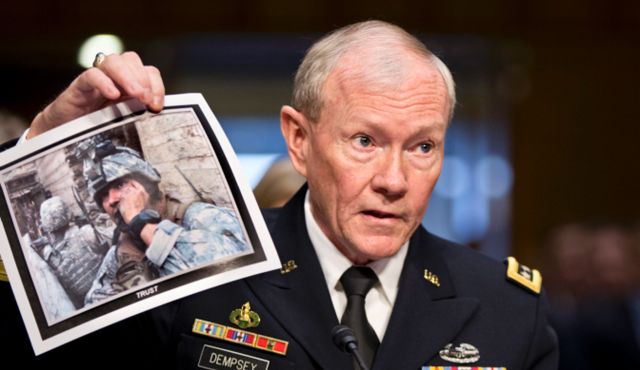 AYOTTE: “Just to be clear, when you came before the committee then you said under no circumstances should we relieve pressure on Iran on those issues. So was it your military recommendation that we not agree to lifting of those sanctions?”

DEMPSEY: “Yes. And I used the phrase “As long as possible.” And then that was the point at which the negotiation continued. But, yes, that was my military advice.”

I’m not a big Kelly Ayotte fan, but good for her on this one. Dempsey just came right out and said that Obama did not follow his military advice on Iran and sanctions on the nuke deal. Not that it will matter. There is a paragraph in the secret Iranian side deal, paragraph 36[4], I believe, that gives any future president or Iran an out on this deal with 35 days notice. That means that Iran can take the deal, get $150 to 200 billion and then nix the agreement whenever they choose to do so. This was never a valid agreement, it was meant to give money to the Iranians so they could finish what they started – their nuclear weapons program and the destruction of Israel. It is Islamic wealth redistribution. If Dempsey were truly honest, that is what you would hear from him.