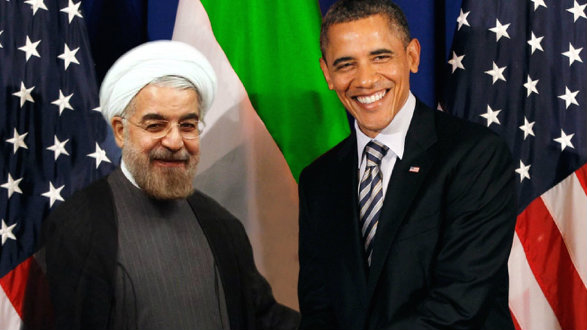 It’s a good thing the Obama administration didn’t help craft an agreement that removed tons of restrictions and sanctions against Iran, and give them $1.7 billion (heck, one report states $33.6 billion[2])

The report, a copy of which was shown to The Washington Post, partly explains the growing unease among some Western intelligence officials over tiny Bahrain, a stalwart U.S. ally in the Persian Gulf and home to the Navy’s Fifth Fleet. Six years after the start of a peaceful Shiite protest movement against the country’s Sunni-led government, U.S. and European analysts now see an increasingly grave threat emerging on the margins of the uprising: heavily armed militant cells supplied and funded, officials say, by Iran.

Signs of growing militancy have been cropping up for years, with arrests of masked operatives planting roadside bombs and seizures of weapons and explosives smuggled into the country by land and sea. But until recently, Western officials have been cautious in accusing Iran of direct involvement in the unrest, citing inconclusive or unreliable evidence, as well as fears of further roiling sectarian tensions. Bahrain, a monarchy, is majority Shiite but ruled by a Sunni minority.

While Bahraini officials frequently accuse Tehran of inciting violence, the allegations often have been discounted as exaggerations by a monarchy that routinely cites terrorism as a justification for cracking down on Shiite activists.

Now, the West’s reluctance appears to be fading. Despite credibility problems raised by Bahrain’s human rights record, Western intelligence agencies are seeing a new boldness by Iran in supporting armed insurgents in the kingdom, according to multiple analysts from the United States and two Western European governments.

Documents and interviews with current and former intelligence officials describe an elaborate training program, orchestrated by Tehran’s Islamic Revolutionary Guard Corps, to school Bahraini militants in the techniques of advanced bombmaking and guerrilla warfare. A wide variety of increasingly sophisticated weaponry — much of it forensically linked to Iran — has been discovered in Bahrain over the past three years, including hundreds of pounds of military-grade explosives that almost certainly originated in Iran, U.S. and European intelligence officials say. The efforts appear to mirror similar ongoing operations to build a network of pro-Tehran militant groups elsewhere in the Middle East, from Yemen to Iraq and Syria, several analysts said.

This is one of those long, long, long articles one expects on the front page of newspapers on Sundays, and notes that this has been going on for years. No mention of Obama and his administration working overtime to hook up Iran, putting lots of money in their coffers. The weapons and weapon making materials that keep being found are expensive and, as the article puts it, unexpected in their complexity. And power.

The report called the existence of such devices in Bahrain “deeply puzzling,” noting that the firepower far exceeded what would be required to blow up the ordinary police cruisers and unarmored transports used by Bahraini patrols. One plausible use for the EFPs would be to destroy tanks and troop carriers dispatched from neighboring Gulf countries in the event of a future conflict. Or perhaps the bombmakers and their sponsors had an entirely different goal in mind, the report said: to “inflict grave damage to U.S. forces and facilities.”

Particularly the U.S. naval operations center in Manama, Bahrain, which has lots of U.S. ships. The amounts of explosive being found are similar to what was used against the U.S.S. Cole.

And, no, Bahrain doesn’t have a really great human rights record, as pointed out ad nauseum in the article. Not mentioned is the even worse human rights record of Iran, which the liberal media had no problem with when their darling Obama was cutting deals with Iran and giving them billions, which allows them to increase their funding of Middle Eastern terrorism.

Interestingly, the Iran deal and all the money are never mentioned in the article. Go figure.