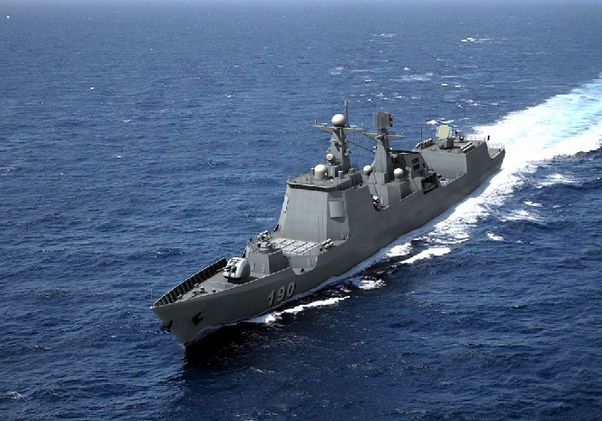 Remember the New Axis of Evil I’ve told you about previously? Well, Russia, China and Iran are busy little demons these days, as you can see in my latest article: The Bear and the Dragon Encircle the Eagle[2]. It’s obvious we are at war and I say that America should bring the action. But with Obama, the Marxist at the helm, I have zero hope that will happen.

The latest chess move is by the Chinese Navy, who has for the first time in history[3] docked their destroyer in a southern Iranian port. The media reported it — briefly in passing with a paragraph or two, hoping the world would ignore it and not notice. Ah, but I noticed as did a number of others. America better wake up – we’re now rocking with the dragon and it is on the move:

Adm. Hossein Azad, naval base chief in the southern port of Bandar Abbas, said the four-day visit that began Saturday saw the two navies sharing expertise in the field of marine rescue.

“On the last day of their visit while leaving Iran, the Chinese warships will stage a joint drill in line with mutual collaboration, and exchange of marine and technical information particularly in the field of aid and rescue,” said Azad.

The report said the destroyer was accompanied by a logistics ship, and that both were on their way to the Gulf of Aden as a part of an international mission to combat piracy.

You might vaguely recall that a Russian Naval group docked in this same port last year on its merry way back from a Pacific Ocean mission. Iran is forming an iron alliance to solidify their hold on the strategic Strait of Hormuz, the passageway at the mouth of the Persian Gulf through which a fifth of the world’s oil is shipped.

You would think the media would be all over this. So many first moves between Russia, China and Iran are occurring and they are forming a menacing alliance against the US, financially and militarily. There’s no other way to view this than as an existential threat against our world presence and in fact, against us as a free nation.

The details of the visit and exercises are scant as you can tell. But just the fact it is ongoing should raise our spidey senses immensely and put us on a war footing. Instead we pretend this isn’t happening. It’s like watching the Nazis march across Europe sucking up countries and acting like it isn’t our problem. Oh, wait…

The ghost of Neville Chamberlain haunts the US currently:

— We should seek by all means in our power to avoid war, by analysing possible causes, by trying to remove them, by discussion in a spirit of collaboration and good will.

— I believe it is peace in our time.

— We would fight not for the political future of a distant city, rather for principles whose destruction would ruin the possibility of peace and security for the peoples of the earth.

— How horrible, fantastic, incredible, it is that we should be digging trenches and trying on gas-masks here because of a quarrel in a faraway country between people of whom we know nothing.

— However much we may sympathize with a small nation confronted by a big and powerful neighbours, we cannot in all circumstances undertake to involve the whole British Empire in a war simply on her account.

This is not some foreign war I’m speaking of. This is our war in our time. We’re not some small, distant nation or foreign city. We are the last super power… the last truly free bastion on the planet and we are in the cross hairs of a new, rising evil spreading rapidly across the globe. Oh, for the wisdom of Winston Churchill:

— Victory at all costs, victory in spite of all terror, victory however long and hard the road may be; for without victory, there is no survival.

— You can always count on Americans to do the right thing – after they’ve tried everything else.

— One ought never to turn one’s back on a threatened danger and try to run away from it. If you do that, you will double the danger. But if you meet it promptly and without flinching, you will reduce the danger by half. Never run away from anything. Never!

Turning our back on this Axis is not only foolhardy, it is suicidal. Daily, we are doubling the danger our country is in by not confronting our enemies and letting them build their military might. I hope we don’t wait for the New Axis Of Evil’s latest military first to be nukes launched against America in the near future. America, grow a set and get ready to fight.