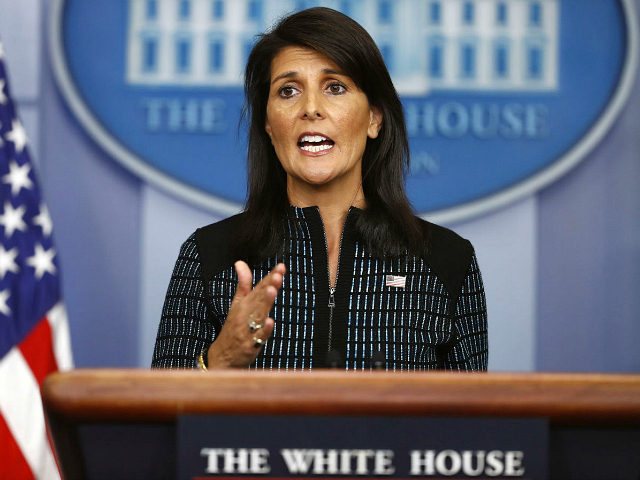 The American Ambassador to the United Nations, Nikki Haley is busy defending Trump’s opposition to the Iran nuclear deal. She attacked the people who want to make big changes to it, asking them if they thought that the deal is working.

When Trump appeared at the U.N. a few days ago, Trump called the deal an “embarrassment.”

A few weeks ago, Ambassador Haley gave an address where she undressed the UN Security Council, claiming that while they’ve been “clear in prohibiting arms transfers to Yemen, Somalia” and other places, the fact that they know weapons are continuing to flow into those regions is an “open violation of Security Council resolutions.” She continued, saying that Iran of all countries “stands out” for the “deliberate” contributions of support for terrorist groups in the area, including Hamas and they are supporting groups that are interfering in Iraq and Syria.

She ended by saying that as long as the Council continues to allow Iran to violate their prohibitions, they will continue to be the main source of weapons and training to terrorists[2] who will grow more and more powerful, and that the United States will not drop the issue until it is resolved.

You can watch her full address from two weeks ago here:

As for the nuclear deal, at a press conference late this week, Ambassador Haley had this answer when she was grilled on how Americans could keep credibility in the international community in dealings with North Korea when they also want to go after the agreement they have with Iran. She points out that Iran is continuing to test ballistic missiles, asking if the deal is working there. “Do you think that deal is working when [Iran is] supporting terrorists everywhere from Lebanon to Yemen to Syria to Iran?”

She didn’t stop there, turning the questions back on the people who criticized her. “What you’re looking at is a country that says ‘Death to America’ working with other countries that may also want the same thing,” she said, stating that Trump has the responsibility to make sure the country and its citizens stay safe.

Nikki Haley isn’t the kind of person who needs much approval from overseas. Back at the beginning of summer, she complained that the rest of the world “would like to tell us how to manage our own environment” when asked about climate change deals. “We don’t need India, and France, and China telling us what they think,” before stating that American sovereignty matters.[3]