NoKos and EMPs – from Russia with Love 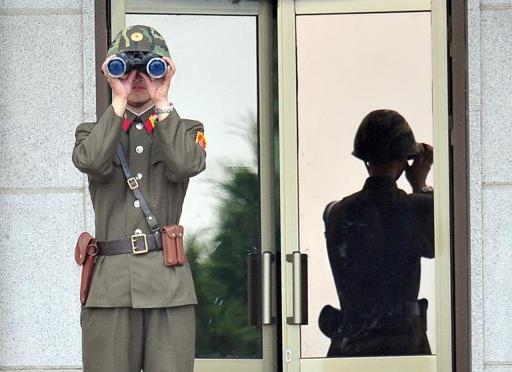 AFP: A North Korean soldier at the truce village of Panmunjom in the Demilitarized Zone …

Crickets. Russia has gifted North Korea with EMP technology. Just what does everyone think they will do with it? It would be a grave and deadly mistake to believe the NoKos would only use these weapons on the South Koreans. Just as it is suicidal to believe the Russians, Chinese and Iranians won’t use them either — on America. It’s not five till midnight anymore — time’s up[2]:

The National Intelligence Service (NIS) said in a report to parliament that the North had purchased Russian electromagnetic pulse (EMP) weaponry to develop its own versions.

EMP weapons are used to damage to electronic equipment. At higher energy levels, an EMP event can cause more widespread damage including to aircraft structures and other objects.

The spy agency also said the North’s leader Kim Jong-Un sees cyberattacks as an all-purpose weapon along with nuclear weapons and missiles, according to lawmakers briefed by the NIS.

The North is trying to hack into smartphones and lure South Koreans into becoming informants, it said.

It has collected information on where South Korea stores chemical substances and oil reserves as well as details about subways, tunnels and train networks in major cities, it said.

North Korea is believed to run an elite cyber warfare unit of 3,000 personnel.

A South Korean lawmaker, citing government data, said last month that the North had staged thousands of cyberattacks against the South in recent years, causing financial losses of around $805 million.

North Korea has denied any involvement in cyberattacks and accused Seoul of fabricating them to fan cross-border tension.

Whether the alliance of evil: North Korea/Iran/Russia/China are the first to utilize EMPs or a massive cyber attack is propagated on us by them or even from the enemies within our government, time is running out[3]. It’s coming and we are not doing anything to stop this catastrophe from taking us down. It’s mind boggling stupid and on purpose. The plan all along was to take America out to pave the way for a new world order. When it happens, millions will perish. Evil doesn’t always lose folks – good has to be willing to fight and defeat it. Right now, the good guys are off in the weeds chasing squirrels. They better get their act together before North Korea or Russia deliver EMPs to the US with love and death.

That was when Obama assured Medvedev he’d have more leeway after his re-election to weaken missile defense. This would help him achieve his dream of U.S. disarmament and bring about, as he expressed in Prague in 2009, “a world without nuclear weapons.”

Apparently the Russians and the Chinese do not share that dream. On Wednesday, Russian strategic forces carried out a large-scale surprise military drill that included the test launch of two land-based intercontinental ballistic missiles and two submarine-launched ballistic missiles.

To placate Moscow, Obama has already betrayed our allies in Poland and the Czech Republic by abandoning plans to deploy ground-based interceptors and missile defense in those countries.

Our Chinese friends have also noticed that the famous “reset” button has been replaced with one marked “easy.” China’s military carried out on July 24 a third test of a long-range DF-31A road-mobile ballistic missile capable of hitting the U.S. with nuclear warheads.

According to a recently published report by the Air Force National Air and Space Intelligence Center, “China has the most active and diverse ballistic missile development program in the world.”

The Russians and the Chinese don’t give a crap about nuclear non-proliferation – just American non-existence. Obama seems to be gleefully helping our enemies carry out our demise. A closing quote from Investor’s Business Daily[7]:

Clearly the Russians and the Chinese are not dreaming of a world without nuclear weapons, just of one without American resistance to their ambitious plans.