Putting ‘Obama Cash’ to Good Use: Iran Buys $21B in Aircraft & Satellites from Russia

Not to worry…[1] I’m sure it’s all for peaceful purposes. Right. I predicted this. The ink isn’t even dry on the damned faux agreement and Iran has gone on a military spending spree that benefits the Russians. Hello? New Axis of Evil much? They haven’t even got the first installment from Obama yet and they have signed a contract with Russia purchasing $21 Billion in satellite technology and aircraft. They aren’t saying how many jets were purchased. Funny enough, just today Iranian officials stressed their evil intent on destroying their enemies. That would be us. War is not far off and I can almost sense an EMP aimed at us now. 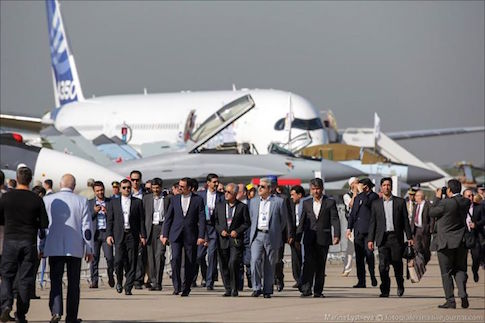 Iran has purchased $21 billion worth of Russian satellite technology and aircraft, according to Iranian officials.

An Iranian delegation reportedly visited Russia’s MAKS-2015 air show and signed an agreement to purchase the equipment,according[3] to Sputnik, which quoted Iranian officials.

“There is a large share of contracts for the purchase of this type of aircraft,” Manouchehr Mantegh[4], an Iranian technology and aviation official, reportedly disclosed, according to Sputnik.

This includes “satellite-related equipment” and the Sukhoi Superjet, a twin-engine passenger plane, according to the report.

The official did not reveal the total number of jets to be purchased.

Tehran has expressed interest in the past in purchasing this type of hardware from the Russians.

Meanwhile, a senior Iranian official on Tuesday emphasized the country’s commitment to destroying its enemies.

Iran will deliver a “crushing response” to any country that attempts to wage war against it, General Seyed Ali Mehrabi, lieutenant commander of Iran’s Army Ground Force for Operations, was quoted[5] as saying by the country’s state-controlled Fars News Agency.

“The enemy is aware that Iran is an important place for all Muslims and an influential country in the region and even the world, given its great capacities,” Mehrabi was quoted as saying.

“Our Armed Forces have proved that if the enemy makes a mistake, they will give a strong and crushing response to them with all their power,” he said.

The biggest mistake we made was electing a Marxist – twice. Now, we are about to pay an incomprehensible price for doing so. In late August, Iranian Vice President Sorena Sattari told the Russian Kommersant Daily that the country was holding active talks with Russia on the purchase of at least two types of military aircraft. Tehran was also interested in using Russian rocket carriers to launch satellites into orbit. When Ted Cruz said that the Iran deal would make the US the greatest financier of terror on the planet, he was exactly right. Flush with ‘Obama Cash,’ the Iranians are speeding up preparations for war with the help of their good friends, the Russians. Iran and Russia have also signed an agreement to cooperate in aircraft engine production recently. The Iran-Russia aircraft deal came amidst increasing cooperation between Russia, Iran and Syria in the fight against the Islamic State in Iraq and Syria. Russia, Iran, Syria and Iraq agreed to set up an intelligence center in Baghdad. Remember, things are never truly what they appear to be. One thing’s for sure, this is very bad news for America and Israel. But of course, Obama is cool with that.