Ringing the Dinner Bell for Russia, China and Iran 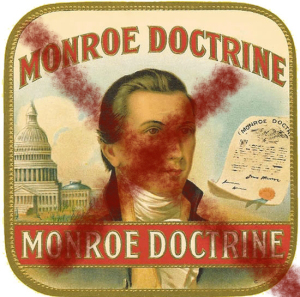 Just when you think it can’t get worse, Obama does something even more treasonous. What scares the literal crap out of me is that no one seems to care.

John Kerry announced on the 18th that the Monroe Doctrine was officially dead, throwing the doors open on this continent to Russia, China and Iran. This move will massively ramp up terrorist and communist infiltration. I look at the puzzle pieces of Obama’s moves lately and a very cold chill runs down my spine. From Chinese troops in Hawaii for the Grid X II drill, to the purging of our military. From Amnesty for millions and the dissolution of our borders, to China’s growing investments in Venezuela, Colombia, Peru and Chile, and in its bailouts of Venezuelan and Argentinian debt. From Russia’s increased military sales to terrorist/communist countries such as Venezuela and their quasi-military bases being stepped up in Nicaragua and Cuba, to Iran bankrolling Hezbollah cells across the hemisphere, shipping people and materiel to Venezuela and laundering cash in Ecuador, while forging alliances wherever they can. Does anyone else see the preparations taking place here? Will anyone resist or will America succumb without the slightest push back?

Diplomacy: Secretary of State John Kerry just scrapped 190 years of U.S. foreign policy in Latin America, casually declaring the Monroe Doctrine is over.Why didn’t he just ring the dinner triangle for Russia, China, Iran and their terrorist catspaws to set up shop, too?

“President James Monroe,” Kerry told the Organization of American States in Washington Monday, “declared that the United States would unilaterally, and as a matter of fact, act as the protector of the region… And throughout our nation’s history, successive presidents have reinforced that doctrine and made a similar choice.

“Today, however, we have made a different choice. The era of the Monroe Doctrine is over,” he declared.

So, with the flip of a rubber-chicken dinner, thus ends the oldest, steadiest and most benign pillar in all U.S. foreign policy, the 1823 “Don’t Tread On Us” policy that Old World powers were not to bring their feuds and battles to the Western Hemisphere, nor to meddle in the affairs of Latin America’s fledgling democracies, most of which had just gained independence from Spain and Portugal and needed to develop in peace.

It was a good policy. Latin America’s great liberators, such as Simon Bolivar who freed Venezuela, Colombia and Ecuador, and Jose San Martin, who freed Argentina, Chile and Peru, both embraced the U.S. with “extreme gratitude.”

And because of that doctrine, Latin America has been involved in very few wars other than civil wars during its short history.

It was a doctrine that reflected that the U.S.’s oldest and most important foreign interests were in its own hemisphere, something that ought to be of comfort to a region that often feels neglected by the U.S.

But instead of defending that two-century-old doctrine, Kerry has decided to scrap it – not just because he doesn’t care about the region, but because he apparently believes the idea pushed by Spanish Civil War leftist exiles and by the likes of Cuban dictator Fidel Castro that the Monroe Doctrine was an evil thing, U.S. imperialism in disguise.

Obviously, by declaring the Monroe Doctrine over in the name of every nation being “equals” now, he is attempting to claim that the Obama administration is atoning somehow for its past.

Well, this should embolden all of our enemies and it will be cold comfort for Trevor Loudon[2] and me to tell you we told you so. Over and over again we have warned America of the communist threat that is alive and well on our own soil and within our own government. We have warned that our enemies are plotting to overthrow us and that our own leaders are communists or proxies for communist governments. I know it is tempting to want to turn from evil and not confront it. We all have families and jobs and just want to lead our lives. But just because you want the bad guys to go away, does not mean they will not come knocking and they are here — now. Enemies from within and without are now making their move — America, please face this threat or we will not survive as individuals, much less as a Republic.

Kerry is a moron and a tool of the Marxists. But Obama is another matter. There are those who control him, but he knows full well what is transpiring. He planned it.

Here’s another revealing quote from The Weekly Standard[3]:

Ah, ha! So that explains why the Obama administration pays little attention to Latin America. Why Iran and Hezbollah are permitted to run amok from Argentina to Mexico, why Latin drug cartels are allowed to make common cause with anti-U.S. Islamist groups in North Africa and the Middle East.

Next thing you know, the Iranians or the North Koreans or maybe even the Russians will give Fidel those missiles he’s always wanted and the whole world will truly be that partnership of equal vulnerability Obama and Kerry so cherish.

Indeed. Vulnerability on a scale we have never seen in this country, brought to you by the Obama Administration and the Progressives. When I say that, I mean on both sides of the aisle. Plenty of blame and tar and feathers to go around on this. When Kerry made the statement, the communists in South America were jubilant[4].

In the name of equality[5], Obama and Kerry will usher in war, death and conquest:

Kerry seemed to agree Monday, saying: “Many years ago the United States dictated a policy that defined the hemisphere for many years after. We’ve moved past that era, and today we must go even further.”

Obama, the Light Bringer, will usher in true communism and horrific bloodshed. In the name of peace, he will bring slaughter and darkness. Sound apocalyptic and straight out of Revelations to you? Me too, as I listen to Obama ring the dinner bell for Russia, China and Iran. America is the main course and it will be a feast for the communists.