Russia – The Horseman of War

“Death on a Pale Horse” (1796) by Benjamin West, Detroit Institute of Arts

When the Lamb opened the second seal, I heard the second living creature say, “Come and see!” Then another horse came out, a fiery red one. Its rider was given power to take peace from the earth and to make men slay each other. To him was given a large sword. (Revelation 6:3-4)

Glenn Beck had a very interesting episode[2] this week and it has the ring of truth to it over Vladimir Putin and Russia. He brought up the possibility that Russia is in the grip of political turmoil and its power structure is fracturing and reforming from within. This all hinges on Putin disappearing for ten days in March and exactly why he vanished[3] for that length of time. 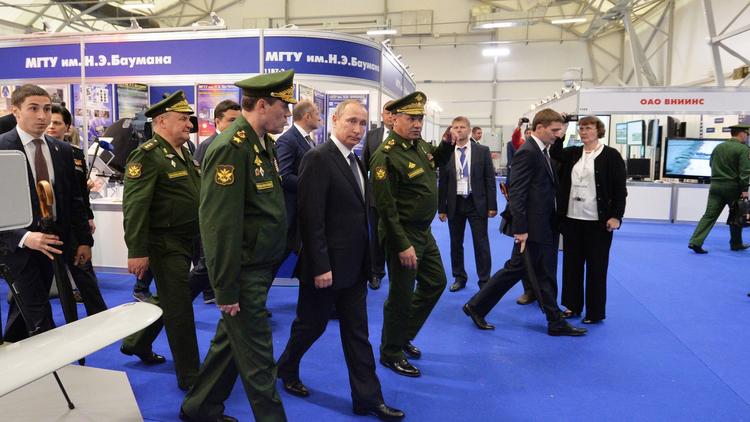 Putin has been hot for the Ukraine and to continue his expansion of the Motherland. However, he seems to have backed off somewhat due to global pressure and financial worries. The radicals within Russia didn’t like that at all and pushed Putin even harder to militarily expand Russia’s reach. At this point, Putin began to bring together a coalition to protect himself and he began transferring power from the Federal Security Bureau to the Ministry of the Interior. That’s akin to taking power from the CIA and giving it to DHS. These two agencies do not play well together.

On March 8th, soon after the assassination of opposition leader Boris Nemtsov, the FSB proclaimed that they had two suspects for the murder. One had been a top commander in the Chechen police, Ramzan Kadyrov, who is a strong supporter of Putin. This was meant to reflect poorly on Putin.

Not long after that development, the major players in Russia starting choosing sides. They either went with Putin and his version of the DHS, or with the FSB and the fascist radicals. The wild card here is the military… whoever wins them over, wins for realsies.

On March 10th, Putin just up and disappeared for ten days. There were a lot of wild theories from the birth of a love child, to a coup. But no one has definitive proof yet. The most plausible explanation is that Putin was held against his will, while power was consolidated within Russia for the FSB and the fascists. He was told to play ball or get ready for the afterlife. This was a show of force by the FSB, Alexander Dugin and the fascists. I’m sure he was told in no uncertain terms to up the military aggression and the process of restoring the motherland. Someone like Putin doesn’t just ‘disappear’ for ten days for no reason. Along with Putin, Victor Zolotov, who controls 200,000 troops for the Ministry of Interior, disappeared with him. One of Putin’s closest crony allies also packed up his whole family, fled the country and simply vanished as well.

So, the lines have been drawn in Russia and sides have been taken. Whoever wins, it will be bad for the rest of the world, trust me.

Now, on to Russia’s military moves…

Russia’s military will add over 40 new intercontinental ballistic missiles[4] this year alone that are capable of piercing any missile defenses according to President Vladimir Putin. It was a stark reminder of the nation’s nuclear might amid tensions with the West over the Ukraine. NATO Secretary-General Jens Stoltenberg accused the Russians of “nuclear saber-rattling” and said that was one of the reasons the Western military alliance has been beefing up its ability to defend its members. The increase in nukes is a very troubling indicator of conflict to come, as is the decrease in the US’ stockpiles by Obama. It’s a recipe for catastrophe for the West. Even worse, our clownish leaders act as if Russia isn’t serious and this is all posturing. Grizzly bears don’t posture… first they maul you, then they eat you… maybe after burying you first for a little tenderizing.

The US and NATO are deploying new weapons and armaments near Russian borders as a tentative response. Russia claims this will foment dangerous instability in Europe[5]. “The United States is inciting tensions and carefully nurturing their European allies’ anti-Russian phobias in order to use the current difficult situation for further expanding its military presence and influence in Europe,” the Russian Foreign Ministry said. “We hope that reason will prevail and it will be possible to save the situation in Europe from sliding toward a military standoff, which could entail dangerous consequences,” the ministry added.

In the perpetual game of RISK[6] that Putin is playing, Russia is pouring all their money into military preps. In the end, they will try to use war to save themselves economically and nationally from going off a cliff. 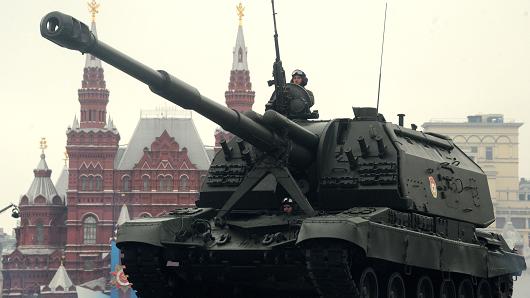 Eastern European and Baltic states sharing a border with Russia include Finland, Estonia, Latvia and Ukraine and they have become increasingly nervous about recent, seemingly provocative military exercises by Russia. This follows Moscow’s annexation of Ukraine’s Crimea region last year, their role in the pro-Russian uprising in Ukraine and the subsequent sanctioning by the West.

“If heavy U.S. military equipment, including tanks, artillery batteries and other equipment really does turn up in countries in eastern Europe and the Baltics, that will be the most aggressive step by the Pentagon and NATO since the Cold War,” Russian defense ministry official General Yuri Yakubov said.

He was also quoted as saying Moscow would retaliate by building up its own forces “on the Western strategic front.” As is typical for the Russkies, in true Progressive fashion, they are claiming[7] all of this is the West’s fault and has nothing to do with Putin’s military buildup and geopolitical aggression.

Russia is still violating airspace across the globe and playing chicken with our Air Force every time they get the chance. They are continuously poking the American badger.

In the latest military development, Russia is warning Sweden that if they join NATO, there will be military consequences[8].

Russia’s ambassador to Sweden has warned the country of the potential military “consequences” associated with joining NATO in an interview with the Swedish newspaper Dagens Nyheter, The Local reports[10].

Russian Ambassador Viktor Tatarintsev told Dagens Nyheter that Russia does not have any military plans against Sweden, in line with Stockholm’s alliance neutrality.

But Tatarintsev warned that this could change if Sweden were to join the NATO alliance.

“I don’t think it will become relevant in the near future, even though there has been a certain swing in public opinion. But if it happens there will be countermeasures,” Tatarintsev said according[11] to a translation from The Local.

“Putin pointed out that there will be consequences, that Russia will have to resort to a response of the military kind and reorientate our troops and missiles,” the ambassador said. “The country that joins NATO needs to be aware of the risks it is exposing itself to.”

Currently, Sweden does not have any plans to join NATO. The country has stayed out of competing alliances between the West and Russia since World War II. However, public support for NATO membership is quickly rising.

An October 2014 poll showed[12] 37% of Swedes were in favor of joining NATO with 36% of Swedes against — the first time that more Swedes have favored joining the alliance than not.

This swing in public opinion could be in response to a series of aggressive and provocative[13] Russian actions throughout the region. On September 17, 2014, two Russian military aircraft crossed into Swedish territory.

Shortly after that, a Russian military aircraft — flying with its transponders turned off — passed dangerously close to a commercial jet in the south of the country.

Most provocatively, the Swedish military believes[14] that Russia sailed submarines into its waters in the fall of 2014, leading to a sub hunt that became Sweden’s largest military operation since the end of the Cold War. 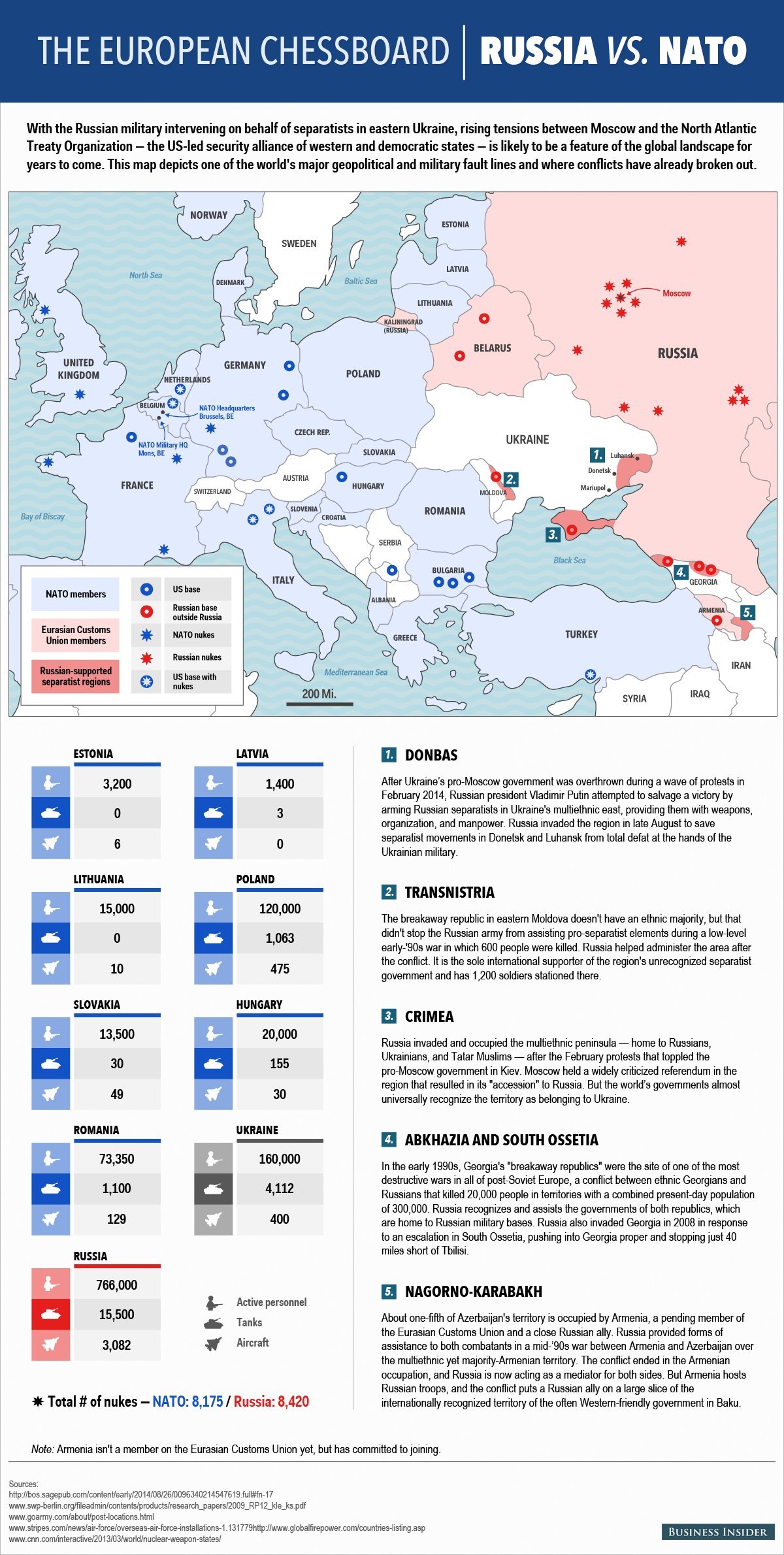 Russia will bring war and will revel in it. Whether it is Putin or a fascist from within the Russian power structure, it does not matter. Alea iacta est (“the die is cast”) is a Latin phrase attributed by Suetonius to Julius Caesar on January 10, 49 BC as he led his army across the River Rubicon in Northern Italy. History is repeating itself, only this time the timing and the moves are eerily similar to Hitler’s moves in WWII. Russia is the horseman of War and with Putin’s moves into Europe and beyond, they will bring bloody conflict, war and death. However, they won’t be alone… China has everything in place to control the planet economically and Iran will have their cut as well. Putin sits astride a red horse in the midst of the ultimate Game of Thrones.