Gee, who didn’t see this coming?[1] Vladimir Putin has officially ascended to the world’s most powerful leadership position – all handed to him by Barack Obama. More ‘flexibility’ at play. As Putin pulls together an international coalition to fight ISIS and defend Assad, the strategies and manipulations of figureheads is becoming apparent. Obama never meant to fight ISIS. He pretended to go after them, but in reality meant for Putin to take the reigns the entire time. There’s no teeth to his opposition of Assad. The new Axis of Evil supports him… Russia, Iran and China. Obama is down with that and behind the curtain is supporting it. He is doing everything he can to empower our enemies. This is more breads and circuses for the masses, while Dr. Evil gets down to the tactics and strategy of carving up geopolitics. No one even shows up to hear Obama speak anymore. Can’t say that I blame them. 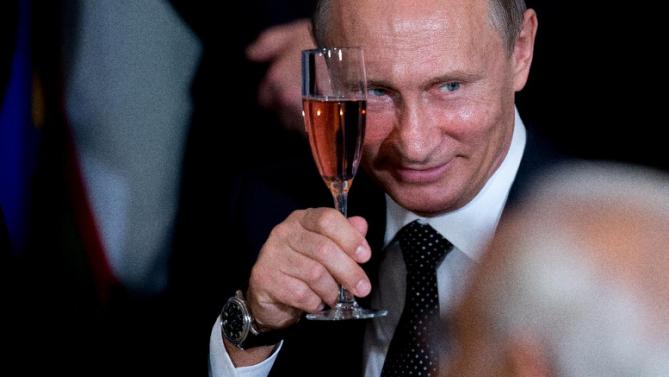 The baton was officially transferred Monday to the world’s new sole superpower — and Vladimir Putin willingly picked it up.

President Obama (remember him?) embraced the ideals espoused by the United Nations’ founders 70 years ago: Diplomacy and “international order” will win over time, while might and force will lose.

Putin, too, appealed to UN laws (as he sees them), but he also used his speech to announce the formation of a “broad international coalition” to fight ISIS in Syria and Iraq.

“Similar to the anti-Hitler coalition, it could unite a broad range of forces” to fight “those who, just like the Nazis, sow evil and hatred of humankind,” he said.

Oh, and if anyone wondered which Syrian players the coalition would rely on as allies, Putin made it clear: “No one but President [Bashar al-]Assad’s armed forces and Kurd militia are fighting the Islamic State.”

That, of course, isn’t Obama’s view. America’s president said he opposed the “logic of supporting tyrants.” After all, Assad “drops barrel bombs on innocent children.”

But Putin has troops in Syria, is arming Assad to the teeth and signed a pact of anti-ISIS intelligence-sharing with Assad, Iran and the leaders of Iraq (the ones America fought to put in power).

And after meeting Obama for the first time in two years Monday[3], he spoke vaguely about future “joint air attacks on ISIS.” But no agreement on Assad was reached in the 90-minute meeting.

Meantime, if Obama has any realistic Syria plan of his own — beyond having Assad magically “transitioned” out of the country and simultaneously fighting ISIS — he failed to present it during his UN speech. Or any other time.

Instead, he scolded an “isolated” Putin for using force to annex Crimea and other parts of Ukraine. “Imagine if, instead, Russia had engaged in true diplomacy,” said Obama. “That would be better for Ukraine, but also better for Russia, and better for the world.”

Then again, imagine if Obama’s eloquence were backed by, say, American-led NATO. Would Putin so easily be able to eat up Ukraine and take over Syria? Not likely.

But even as he chided Russia, China and even Iran for being steeped in the policies of the past, it was Obama who at times sounded like a throwback to days of yore.

His celebration of the United Nations was reminiscent of scenes from 1950s movies that portrayed it as a place where problems are actually resolved. In reality, along the decades (and even more so in the last six years), the UN became so paralyzed that it can no longer serve as arbiter of global security.

Obama’s speech was, as ever, full of promise. His turn from using “might” to claiming to have “right” on his side and relying on diplomacy have led to America’s opening up to Cuba and a key deal with Iran on nukes. But these are yet to yield positive results. “If this deal is implemented,” he said of Iran, “our world is safer.” Big if.

By contrast, Putin’s deployment of forces in Syria and arming of Assad create facts on the ground. They have also propelled him to the top by taking initiative on today’s most consequential world fight.

Although Obama received much less applause during his Monday speech than in past years, he’s still well-liked at the world body. Yet those who count, the ones he scolded in his speech — Putin, Assad, China’s Xi Jinping and even Iran’s President Hassan Rouhani — weren’t in their seats to hear his words.

Because as forceful as Obama’s words are, they’re rarely backed by action.

Putin? Nobody applauded him. He’s more interested in being feared than liked. Then again, his words, at most, are meant to explain forceful action.

And that, to borrow from Obama’s speech, is bad for Syria, where the war will continue as long as Assad remains in power. It’s bad for Europe and Syria’s neighbors, which have no idea what to do with that war’s refugees.

And it’s bad for America. Because sooner or later, after more bloodshed and under even worse conditions than now, our next president will be called upon to retake the leadership baton from Putin. And that could prove tricky.

I’m sure that Obama is eyeing a cushy position at the UN after stepping down from the presidency. Why bemoan not ruling America anymore, when you can rule the world? It worked for Pinky and the Brain, why not Obama? The whole ploy here all along was to showcase Putin as the strongman. Instead of stopping his incursions into the Ukraine and other territories, we let him have his way. Then he turned his eyes to Syria and ISIS. Radical Islamists make a fine excuse for becoming the savior of the world, plus Putin will control parts of Syria when he’s done and benefit economically. Just like he has done in the Iran deal. With Russia, Iran and China now dominating the planet, things are drastically less safe and the US stands on the cusp of being subjugated by a myriad of enemies. In the picture below, Putin looks reluctant to even touch Obama. In the end, Obama is a game piece that will be used and discarded and he doesn’t even get that. There is a food chain for Marxists and Obama is nothing but chum for bigger predators. Thanks to Obama, one of the world’s most evil men has become the most powerful on the planet. Let the apocalyptic games begin. 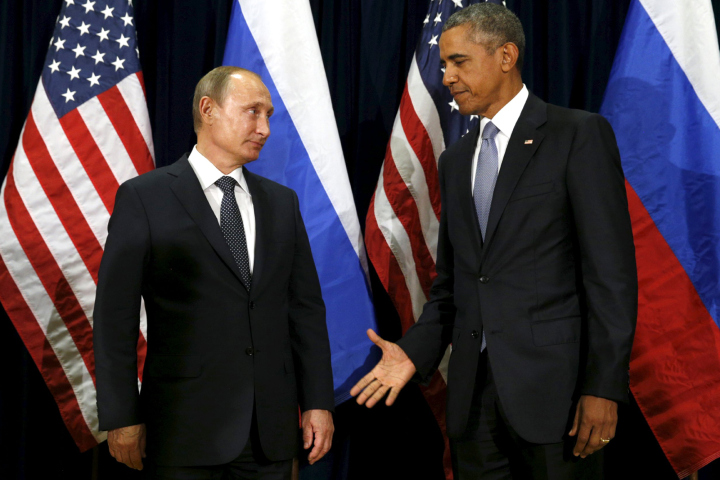